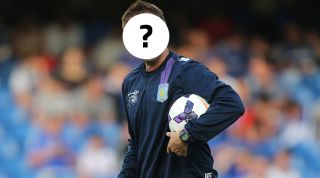 The Football Association has issued a warning to promising young footballers that men passing themselves off as ‘Premier League scouts’ may in fact be working for Aston Villa.

During the January transfer window thousands of aspiring footballers will be hunting for clubs, but that may leave them vulnerable to murky practitioners claiming to represent a ‘prestigious Premier League side’ who in fact intend to lure their unwitting targets to Villa Park.

Responding to the news that Villa scouts had been openly attending matches, the FA has made a statement urging players to put safety first and contact them if at any point they are approached by a shifty man in a claret and blue tracksuit reeking of desperation.

“The FA has received worrying reports of scouts approaching players making out that they can offer them a Premier League future when in fact they work for Aston Villa,” an FA spokesman told FFT.

“We urge players to do their due diligence and ask any scout who approaches them which teams their club has beaten this season. If that list is shorter than two clubs then there’s a good chance he is in fact from Villa.

“Everybody thinks that signing for Aston Villa is something that happens to someone else, but while nobody sets out to do it, it happens to scores of perfectly good players every year. Many of them are never heard of again.”

FFT was contacted by a Championship player who wished to remain anonymous and believes he has been approached by Aston Villa.

“The scout was very vague about exactly which club he was from, but he repeatedly said that right now, at this very moment, his club are in the Premier League, technically,” the clearly shaken player told FFT.

“He then presented me with a contract where the club name was repeatedly smudged. I asked whether it was Arsenal and he said that, in one sense I was close [to guessing it].

“After that he laughed manically for a while, then he cried a little and asked me lots of questions about life in the Championship on behalf of a ‘friend’.”

The FA has stressed that any player who feels he may have inadvertently signed for Aston Villa should get in touch before February 1 because the situation may still be remedied.