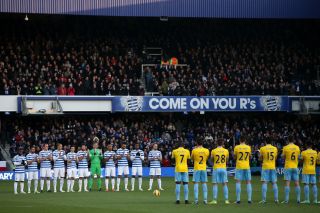 In a game of very few real chances and just 6 shots on target all game (3 apiece) London rivals QPR and Crystal Palace played out a goalless draw.

Palace sacked Neil Warnock in the days leading up to this game and caretaker boss Keith Millen made a few changes to his team, deploying Wilfried Zaha in an unfamiliar forward role supported by Yannick Bolasie and Jason Puncheon. Harry Redknapp went for his tried and trusted 4-4-2, with the league's leading scoring Englishman Charlie Austin in attack alongside Bobby Zamora.

In reality it was a game of little incident. The pass counts were low (226 vs 212 completed) with QPR edging possession (53.3%). QPR were more aggressive in the tackle winning 31 of 39 attempted, earning their clean sheet, and in the end both teams shared the spoils. QPR climb to 15th while Crystal Palace remain in the bottom three.