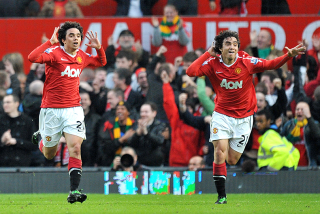 The Brazilians moved to England from Fluminense in January 2008, and although Rafael enjoyed more game time at Old Trafford – making 169 appearances to Fabio’s 56 – the pair were able to lift the Premier League title together in 2010/11.

Rafael linked up with Lyon in 2015 and has since made 50 league outings for the seven-time Ligue 1 champions. But he has many fond memories from his time at United – especially the days when the manager failed to tell him and his twin apart.

“Was there ever a time when Ferguson got us confused? It happened many, many times,” he laughs in the October 2017 issue of FourFourTwo magazine – out now.

“It wasn’t rare that before training he’d look at me and say: ‘Come on, go to the left wing.’ When that happened, I used to just look at him. Then he’d go: ‘I meant right wing, Rafael!’ It’s funny to remember it – Fergie is a special person in my life.

“He’s the best manager I’ve ever worked with, no doubt. I learned so many things from him and I will be grateful for that forever. He’d always have some good advice to tell you at training. He knew exactly how to deal with each of his players – ones who’d improve with some compliments and motivation, and ones he’d need to be severe with. That, plus his knowledge of the game, made him the best.”

The 27-year-old won three Premier League titles, two League Cups and the FIFA Club World Cup during his United career, starting the 2008 final in Japan. And he is optimistic that both his former and current clubs can mount title tilts this term.

“I was very happy [at United] and grew up both as a man and as a player, too,” Rafael says. “I feel confident after the signings they’ve made – I hope they will become Premier League champions this season.

“Lyon are going in the right direction to become champions again. The squad has a good mix of talented young stars and some experienced players. With Fergie I learned that's key in building a successful team.”

Read the full interview with Rafael in the October 2017 issue of FourFourTwo magazine. A new signings special, we chat to Bernardo Silva and Davy Klaassen about their switches to Manchester City and Everton respectively and look at how Romelu Lukaku, Alexandre Lacazette, Alvaro Morata and Mohamed Salah will fare following their big-money moves to the Premier League. Plus, we reveal the 25 greatest Champions League games ever, meet the FA Cup’s youngest manager who set up a football club following the London riots, recall Derby’s disastrous 2007/08 campaign, learn about the science behind team chemistry, go One-on-One with Luis Garcia and – in the first of a new interview format – hear the incredible story of 28-year-old Rochdale midfielder Joe Thompson, who is targeting a return to action after battling two bouts of cancer. Order a copy today here and then subscribe!