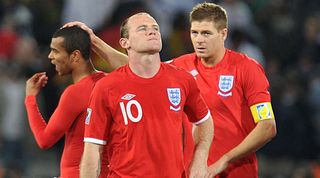 It wasn’t that the defending World Cup holders crashed out early in Germany. In fact, they reached the second group stage. It was more the fact that Brazil ditched the beautiful football they’d played four years earlier in Mexico and adopted a far more hard-edged, pragmatic approach to matches. Coach Mario Zagallo warned recently bulked-up stars like Jairzinho and Rivellino that they’d have to withstand the physical challenge of European opponents, and so it proved.

Brazil – minus Pele, Carlos Alberto and Tostao - drew their opening two games with Scotland and Yugoslavia 0-0, before squeaking into the latter stages on goal difference following a 3-0 win over Zaire. Their clash with Holland was effectively a play-off for the final, and the Dutch, with Johans Cruyff and Neeskens at their brilliant best, simply outshone the surly Brazilians, clad in uncharacteristic dark blue shirts.

The final act of petulance from defender Luis Pereira, who was red carded after hacking down Neeskens, was a betrayal of everything Pele and his team-mates espoused four years earlier.

Of course, the losing finalists weren’t the worst football team in Spain, but in terms of utter cynicism and a lack of sportsmanship, they are surely the most motley crew ever to play at the World Cup finals.

First, there was the notorious El Anschluss match against Austria. Following an early Horst Hrubesch goal, both countries were content to play out the 1-0, happy in the knowledge that the result progressed them to the second group stage at the expense of plucky Algeria.

“We have gone through, that’s all that counts,” insisted a pragmatic Lothar Matthaus who, along with his team-mates, later bombarded protesting fans with water balloons from their hotel bedroom windows. Then there was Toni ‘Harald’ Schumacher’s horrific assault on French forward Patrick Battiston in the semi-final, which left the Frenchman unconscious on the turf. Fortunately, the West Germans lost 3-1 in the final to Italy, but the stench of foul play lingered for years.

That began to evaporate after goalkeeper Rob Green’s howler against the USA in a 1-1 draw, and disappeared altogether when Rooney criticised England fans as he stomped off the pitch following a dreadful 0-0 draw against Algeria. Jermain Defoe’s goal against Slovenia steered Capello’s side towards a last-16 clash with a resurgent Germany.

The feeling of impending doom wasn’t misplaced: England were comprehensively taken apart in a German masterclass. Supporters could rant about the injustice of Frank Lampard's shot which crossed the line and should have levelled the score at 2-2, but the truth was that a 4-1 win reflected Germany’s dominance.

Credited in some quarters with coining the phrase ‘Group of Death’, coach Omar Borras – a former PE teacher and fitness obsessive – had been castigated by many Uruguayans pre-tournament. His lack of tactical nous was one thing, but links to the dictatorial regime whose iron grip of the nation had only just ended before the 1986 tournament were too much to accept.

In a group containing West Germany, Denmark and Scotland, La Celeste took cynicism to a new level. After forcing a creditable 1-1 draw against the Germans, they ended up losing 6-1 to the rampant Danes – but not before Miguel Bossio was sent off for a violent challenge on Frank Arnesen.

Uruguay were fined by FIFA and threatened with expulsion from the tournament if the foul play continued. Borras’s team failed to heed the warning and, in a turgid 0-0 draw with Scotland (which saw Uruguay sneak through to the knockout stage), Jose Batista ploughed through Gordon Strachan from behind after 39 seconds to earn a red card. It remains the fastest ever administered in a World Cup finals match.

Eventually, the whiter-than-white Argentines nudged out their rivals from across the River Plate in the last 16, to virtually everyone’s delight.

It wasn’t simply that a talented, albeit totally disparate collection of French stars departed South Africa after collecting just a single point in Group A – more the classless way that those players behaved which sullied the whole experience. Perhaps it was the fault of hapless coach Raymond Domenech, who failed to man-manage ageing talents like Thierry Henry and William Gallas effectively.

At half-time of France’s defeat to Mexico, striker Nicolas Anelka exchanged pleasantries with Domenech, where the former Arsenal striker allegedly told his coach to: “Go f**k yourself, you son of a w**re.” The resulting disagreement over Anelka's expulsion from the squad between players and authorities led to some stars threatening to boycott their final match.

Although this was averted, the French went through the motions as hosts South Africa defeated them, leaving one of the pre-tournament favourites rock bottom of their group. The reputations of several players, and Domenech, were in tatters.

When the South Americans qualified for the first post-war World Cup in Brazil, they hoped to fare rather better than their predecessors had in the inaugural 1930 tournament, when they were clobbered 4-0 by both Brazil and Yugoslavia in the group stage.

Yet 20 years later in Belo Horizonte, Los Altiplanicos outdid themselves by shipping eight goals against tournament winners Uruguay – and because Pool Four only contained those two sides, Bolivia’s World Cup was abruptly ended after a single, dismal match. Perhaps that was no bad thing.

With a potent mix of seasoned professionals like Johnny Ekstrom and Roland Nilsson, bright young star Tomas Brolin, plus new Arsenal signing Anders Limpar, Olle Nordin’s team was tipped to be a surprise package at Italia ’90. Yet as Brolin later admitted: “The pressure got to us, and we froze.”

A Careca double helped Brazil cruise to a 2-0 victory in the first group game, and after a determined Scotland beat the Swedes 2-1, Nordin admitted: “Our mindset is too fragile.” There was no consolation in the final match against Costa Rica either, with Hernan Medford scoring a winner in the 87th minute.

After taking an early flight home, Nordin insisted that the team would learn from their chastening experience. They certainly did, and became a genuine European force in the years that followed – but with Tommy Svensson at the helm, not Nordin.

A national hero after steering Greece to their first ever World Cup finals, things quickly unravelled for head coach Alketas Panagoulias once the tournament actually kicked off. The hapless Greeks failed to score at USA ’94, and the most memorable moments in their matches came courtesy of Diego Maradona (whose crazed celebration after his thunderous finish in Argentina’s 4-0 win remains one of the World Cup’s most infamous moments), and Daniel Amokachi, who thumped home a superb second in Nigeria’s 2-0 win.

To cap it all, Bulgaria also walloped Greece 4-0. Panagoulias, who’d opted for experience over youth in the squad, resigned immediately after the tournament, describing himself as “broken-hearted”. The majority of the squad never played international football again. It was every inch a Greek tragedy.

“The country was in deep suffering and we had the pressure of trying to reduce it,” midfielder Mauricio Alfaro told FourFourTwo – so war-torn El Salvador’s football heroes travelled to Spain in good heart.

That was until they fell to pieces against Hungary in their opening World Cup clash, losing 10-1, which remains the most unwanted of finals records. Substitute Laszlo Kiss completed a seven-minute hat-trick, and not even the fevered celebrations of Luis Ramirez – who netted a consolation for the Salvadorians – could hide the players' shame.

After a tactical shake-up, and a coup against the manager, El Salvador regained some pride by fighting to the last against both Belgium and a frustrated Argentina, losing 1-0 and 2-0 respectively. The 10-1 scoreline against Hungary had made the team an international laughing stock, although it was no joke for the players, many of whom were shunned after returning home.

The first Sub-Saharan side to play at the World Cup endured a torrid time. After riding their luck against Scotland, where they were lucky to concede only two in their 2-0 defeat, Zaire caved in against Yugoslavia, suffering a 9-0 shellacking.

Chastened by the defeat, the players were summoned by team officials and informed that their performance had so disgusted the country’s leader, the despotic President Mobutu, that if they conceded more than three goals to world champions Brazil, they might not be allowed home after the tournament.

The Africans defended to the last man, and despite the embarrassment of Mwepu Ilunga dashing out of a defensive wall to hoof the ball away as Rivellino prepared to shoot, they kept the score down to a semi-respectable 3-0 loss. Still, with 14 goals conceded and none scored in three games, an incensed Mobutu insisted the national team’s performances had “embarrassed the entire continent”. Harsh.

Jon Spurling is the author of Death or Glory: The Dark History of the World Cup