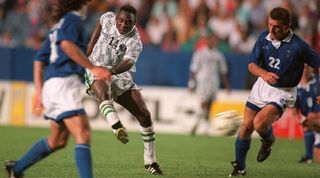 World Cup goals come in all shapes and sizes. Some of the best live on in tournament folklore and as staple features of any highlights package, while others are curiously overlooked.

Everyone remembers Diego Maradona's solo effort against England, Michael Owen slaloming through the Argentina defence and Dennis Bergkamp’s sublime control and half-volley, but there are plenty of impressive goals that seem to have slipped most minds...

This game was poised at 0-0 when the board went up indicating two minutes of added time. Romania were in possession and would surely have been content to see things through to the break without incident.

Instead, an attack developed down the left. Adrian Ilie played the ball into Gheorghe Hagi and ran on to receive his backheel. Heading into the box, Ilie jinked past a despairing lunge and elegantly lifted the ball over the advancing Faryd Mondragon into the back of the net. Lovely.

A great goal that ultimately counted for nothing. The reigning champions struggled in South Africa, drawing their opening two group games against Paraguay and New Zealand.

They finished rock bottom after a 3-2 defeat to Slovakia, Italy’s second coming courtesy of Fabio Quagliarella in injury time. The striker delicately chipped the ball over Jan Mucha from arund 25 yards out, and went on to join Juventus that summer.

Denmark were two goals ahead in their last-16 tie against Nigeria and Sand had just been introduced off the bench. Within seconds it was 3-0.

Michael Laudrup, searching for an opening, spotted the substitute’s run. The midfielder duly scooped the ball over Nigeria's defence with the outside of his foot and Sand got there first, nodding the ball inside covering defender Taribo West and then firing low into the bottom corner with conviction.

The 2006 World Cup in Germany was a first for the Ivory Coast, whose golden generation were all coming of age. But they were drawn in a tough group, and losses to Argentina and Holland led to a hugely disappointing premature knockout with a game to spare.

They were already two goals down to the Dutch by the time Bakari Kone struck late in the first half. A quick free-kick set the winger on his way, and he ghosted past two defenders before planting a corking shot out of Edwin van der Sar’s reach.

A Shaqiri-inspired Switzerland secured their passage to the last 16 with a thumping 3-0 victory over Honduras in 2014. The Bayern Munich winger scored a hat-trick, and his first was the pick of the bunch.

Receiving the ball on the corner of the box, the mercurial midfielder drove infield at an angle, edging further away from goal with each step. Somehow, though, Shaqiri managed to whip his left foot around the ball and generate an astonishing level of power to rocket home into the top corner.

Nigeria were progressing from the group phase regardless of this goal, but Amokachi’s glorious 95th-minute strike ensured they did so in top spot. The Super Eagles finished level on points with Argentina and Bulgaria, but with a marginally better goal difference secured through Amokachi’s bustling run and finish. The powerful striker, whose performances at the World Cup led to a £3 million move to Everton, forced his way past two defenders and slammed a late shot into the top corner.

Sweden were one of the surprise packages of USA '94, where the goals of Martin Dahlin and Andersson powered them to the semi-finals. They drew 1-1 with Brazil in their final group game, and went ahead through the latter's beautiful improvised finish.

Tomas Brolin rode one challenge in midfield and then lofted a diagonal pass onto the striker’s chest. It bounced once, and from a tight angle, Andersson somehow lobbed the ball into the far side of the net with the outside of his right boot. Even better with Swedish commentary, in FFT's opinion.

Prior to their success at Euro 2008, Spain were just another talented side prone to cracking under pressure. At the World Cup two years earlier they had played some fine football and topped their group with three victories, but succumbed to eventual runners-up France in the last 16.

A 4-0 win over Ukraine in their opening match demonstrated what might have been, Fernando Torres lashing home the final goal on the half-volley after a slick move started by Carles Puyol's glorious roulette. Where did that come from?

The Dutch left-back didn’t score many goals during his international career – just six in 107 appearances for his country – but he was prone to the odd spectacular strike. The 2010 World Cup semi-final wasn't a bad place to pull off one of them.

Van Bronckhorst was more than 35 yards from goal and at a ridiculous angle out wide when he received possession – not that it deterred him. The 35-year-old took a touch and decided to take aim, arrowing a stonking effort into the top corner which clattered in off the post to set Holland on their way to a 3-2 victory just 18 minutes into this entertaining final-four showdown.

After Senegal had shocked France in the opening match of the 2002 World Cup, the second Group A game had a lot to live up to. It didn’t disappoint, though, and indeed delivered one of the goals of the tournament – and World Cup history, for that matter.

Alvaro Recoba’s outswinging corner was headed clear to the edge of the box, where it was kept in the air by Pablo Garcia and flicked over to Dario Rodriguez for a spectacular first-time volley to bring the scores level. Thomas Sorensen didn’t stand a chance.

His brief spell at Bolton might have been forgettable, but three years earlier Borgetti had scored one of the best and most innovative goals at a World Cup.

Here, the ball was worked out wide and then cut back to Cuauhtemoc Blanco, who clipped a pass in towards the near post at head height. Tightly marked by Paolo Maldini and facing away from goal, Borgetti expertly twisted his body to glance the ball back over his shoulder past a motionless Gianluigi Buffon. The Azzurri net-minder could be forgiven for not even seeing it.

Although Cameroon had Patrick Mboma and a teenage Samuel Eto’o in their squad, it was an unheralded defender who made their most memorable attacking contribution at France '98.

There didn't appear to be much on as Njanka picked up the ball in his own half and ripped forward into the space ahead of him. But then he accelerated past one challenge, cut inside another and fired into the top corner for his first international goal. The excitement wasn't to last, though – Njanka's 77th-minute missile was cancelled out in the 91st minute, and Cameroon picked up just a point from their final two group games to finish bottom.