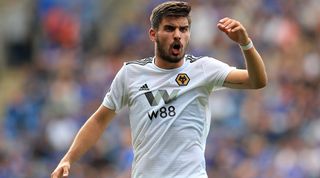 Two penalty saves in his first two Premier League appearances wasn’t a bad start to life in the top flight and, given the circuitous route Etheridge has taken to get here, hopefully it’s been worth waiting for.

A Philippines international, he was actually playing in front of 90,000 fans before he was even a Football League regular but, having arrived at Cardiff as a nominal back-up in 2017, his career has really taken off. Neil Warnock’s side are going to struggle this year, that much is clear, but Etheridge has already shown himself to be a fine keeper with a more than useful set of reflexes.

Warnock will need the 28-year-old's form to continue behind a side who don’t look likely to score a lot of goals.

Imagine what he'd be like if he was in his prime. Moutinho was a known commodity in European football; he was part of that excellent Monaco side which went within a game of the Champions League final in 2016/17, but he’s made a very quick adjustment to English football. He's proven to be exactly as advertised.

The pace of the game is quicker here, but the 32-year-old seems to have as much time on the ball as he ever did. Wolves are a very neat, very expressive side, and Moutinho’s ability to cut lines and ping passes to the touchline enables much of that. They play with great pace and with a breathless intent on the counterattack and, without Moutinho, it would look nearly so fluid.

Currently, his floated cross-field ball is the prettiest sight in the whole of English football.

In all likelihood, his true worth won’t be seen until Chelsea settle into life under Maurizio Sarri. They’re playing well and remain unbeaten, but there’s clearly some room to grow and Jorginho is intended to be the centre point around which that evolution is supposed to happen.

Nevertheless, he already looks worth every penny of Chelsea’s £50m investment. Sarri continues to have a few issues at the top of the pitch, caught as he is between Alvaro Morata and Olivier Giroud, but the supply of possession from midfield has really never been better and the route out of defence never more clear.

A gorgeous footballer, Jorginho is set to glow ever brighter as the other components settle around him.

Patricio almost snuck into Molineux over the summer, signed on a free transfer following the mess at Sporting Lisbon. What an impact he’s made though, looking every inch an international goalkeeper with 75 caps.

As with any keeper though, his influence is really seen in the collective: the goal scored by Fred at Old Trafford was the first Wolves had conceded in almost a month and, barring some early sloppiness against Everton and Leicester, they’ve looked bar far the most secure of all the promoted sides. In fact, only three teams in the division (all of them inside the top three) have a better defensive record.

Excellent goalkeeping breeds stability; nowhere is there a better example of that.

Wolves are here and they’re making quite the impression. Naturally, most eyes have been drawn to the Moutinho/Ruben Neves axis in midfield, Rui Patricio’s fine start in goal, and to that cluster of technical forwards at the top of the pitch.

Boly has been the bedrock, though. No, the Frenchman's goal against Manchester City shouldn’t have counted, but he’s been generally excellent in both penalty boxes and, despite his size and profile, he’s a very modern centre-half. He may not quite be John Stones, but his composure in possession and ability to carry the ball beyond pressing attackers makes him perfect for Nuno Espirito Santo’s retention-based style.

Really, this is a future £50m player.

Everyone will have seen his goal against Burnley by now, but that wasn’t necessarily an accurate measure of his worth. Seri can score goals - and spectacular ones, clearly - but it’s the breadth of his attributes which will have convinced Fulham to part with £25m this summer.

The defence behind Seri has issues and, at the time of writing, that continues to inhibit Fulham’s ability to express themselves in the Premier League. That shouldn’t detract from just how complete a player the Ivory Coast international is, though, and what he’s been able to bring to the centre of their formation. Touch, bite, vision; he has it all. Fulham might not stay at this level, but he certainly will.

Hopefully, in time, they’ll build him a platform from which the 27-year-old can really excel.

This list is Wolves heavy, but what do you expect? And, really, why shouldn’t it be?

Neves looked to be in a category of his own in the Championship last season and, alongside the class of Moutinho, the Portugual international already looks like one of the better midfielders at the level above. The modern expectation is for players in that position to contribute in both halves of the pitch and Neves fits that template: his opening day free-kick against Everton will have piqued the neutrals’ interest, as will the temperament and imagination he’s currently bringing to his side’s attacking moves.

But - as ever - it’s the range of his skill set which has most impressed. N’Golo Kante is the division’s best all-rounder by consensus, but - at just 21 - Neves almost certainly has that kind of status in his future. There really isn’t a department of the game in which he doesn’t already look accomplished.

His future might not necessarily be at Molineux - his agent, Jorge Mendes, does like to move his chess pieces - but wherever it occurs it will be well worth watching.

QUIZ Can you name the top 60 most valuable English players in the world?

Like a duck to water. The remarkable thing about Maddison is not his technique, which most were well aware of already, but rather just how comfortable the midfielder looks in the Premier League.

Three goals is a fine return and he’s already documented his fine vision and array of passes, but it’s his demeanour which has been truly startling. He wants the ball, all the time, and he’s absolutely convinced of his ability to use it.

Maddison hasn’t tip-toed onto the stage, he’s swaggered through the curtain and headed straight for the spotlight. And maybe - maybe - the England team before much longer. The £30m summer fee looks like a hell of a deal for a player who plays like he’s special and carries himself like a star.

Over to you, Gareth - let’s have a look.