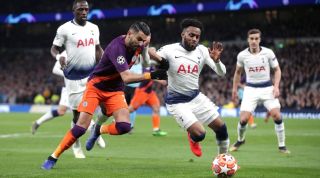 Manchester City supporters have grown accustomed to Pep Guardiola’s tactical tweaking, but the inclusion of Riyad Mahrez for their opening game of the new Premier League season was surprising. The Algerian wide man featured little in last term’s title run-in and played all the way to the final of the Africa Cup of Nations this summer, where he helped his side to 1-0 victory over Senegal.

“Riyad called me after the Africa Cup of Nations to say he only needed 10 days’ rest,” said Guardiola after the 5-0 victory against West Ham United. “He wanted to come back soon and he wanted to play. I like it!”

Mahrez likely would have started the Community Shield against Liverpool, but he had a minor procedure on his nose following his nation's exploits and City didn’t have the right information regarding which medication he took. Instead, Bernardo Silva’s muscular problem and Leroy Sané’s long-term injury meant that he had his moment to shine at the London Stadium. Mahrez may have been overshadowed by Raheem Sterling’s hat-trick, but he took his opportunity with two assists in an overall influential display.

And yet that wasn't what stood out. It was his actually defensive work which made a lasting impression – and was perhaps the reason why Guardiola was so happy with him at the final whistle.

"The only problem [Riyad] had last season is that the manager didn’t select him often because he had one of the best players of the season, Bernardo,” admitted Guardiola. “Bernardo now knows, ‘Wow, Riyad is an incredible player’ and has to make a step forward.”

The Portuguese playmaker probably knew that already, but he may have been shocked by the ex-Leicester City man's work rate. Mahrez made four tackles and two interceptions against West Ham, which was highlighted more by his West Ham counterpart’s failure to follow runners. In doing so, he could have prevented at least two of City’s goals.

Guardiola expects his wingers to track back and provide a solid shape, although Mahrez’s contributions were something of an outlier in comparison to the other wide players. Sterling and Sané average around a tackle per game, and Bernardo three tackles for every two games, while Mahrez produced just one in two matches last term. The Algerian wasn’t your typical Guardiola player when he signed last summer, and it was his ability to offer something a bit different which attracted the Catalan to him in the first place – not his ball-winning attributes. But even Sergio Aguero had to embrace the idea of defending from the front, and it illustrates a commitment to his philosophy.

It’s notable that Mahrez’s three best defensive seasons at Leicester came in the campaign when they were promoted from the Championship, battling relegation in their first season and then winning the Premier League the year after. There was a subsequent drop-off in his final two seasons at the King Power Stadium; whether that was down to design or application is debatable.

When Mahrez was included for the Champions League quarter-final first leg against Tottenham Hotspur in April, it was fair to say that many of the travelling fans were far from endeared with the idea. Bernardo was missing once again, and given that Mahrez had scored in the previous league fixture against Mauricio Pochettino’s team, Guardiola's decision was understandable. The manager chose to single out Mahrez for praise in the 1-0 defeat, as he was “aggressive” and “delivered good crosses”, although it was ultimately a frustrating night for the Premier League champions and their £60 million signing. The winger was isolated in the first half and then leading the line when Son Heung-min netted the only goal of the game.

Tottenham left-back Danny Rose evaded challenges from Mahrez on two occasions, and the winger was unsuccessful with each of his three attempted tackles. Guardiola may have spoken glowingly about his attacking capability after that game, but declined to use him in the next five weeks.

Quiz! How many 2019/20 Football League clubs' nicknames can you recall?

The West Ham match was the first time that Mahrez had completed 90 minutes for City since February. Last year’s pre-season was disrupted by an ankle knock, and although he hasn’t had much preparation with his side this summer, he still has the momentum from playing for Algeria.

He will likely need rotating in the coming months due to his short holiday, but for now Mahrez will simply be pleased to be pulling on a light-blue shirt more regularly. With Sané expected to miss the majority of 2019/20, it now gives his colleague the perfect platform to prove his worth in both a defensive and attacking sense.

RANKED! The 7 most entertaining fixtures in the Premier League – and when they’re being played in 2019/20