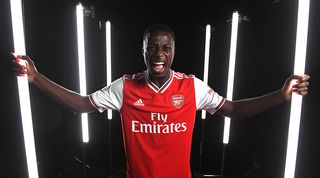 The ovation reflected the return of the hometown hero. Or so it seemed at the time. Perhaps, as Jay Rodriguez made his second Burnley debut in a late cameo against Southampton on Saturday, it was simply some sympathy for the elderly.

The striker may have just turned 30 and be more than eight years younger than Gareth Barry, a West Bromwich Albion team-mate last season, but he has a distinction that makes him appear a footballing pensioner. He is the only player aged 27 or over bought by a top-flight English club for an eight-figure sum this summer. The oldest man to command a fee more than the £10 million Burnley paid for Rodriguez is Harry Maguire, who is younger than the Premier League itself. The world’s most expensive defender is an outlier in more ways than one.

After a weekend when Frank Lampard picked Chelsea’s youngest Premier League side for seven years and they were still older than their opponents Manchester United, England can feel like no country for old men. Or, indeed, for relatively young men. The summer business was concentrated on players whose peak should lie in the future. The majority of those who went for £10 million or more are 21, 22 or 23. There are more teenagers, in Ryan Sessegnon and Moise Kean, than expensive additions over 26.

All of which marks a contrast with the recent past, when sizeable fees were paid for players in their late twenties such as Kyle Walker, Gylfi Sigurdsson, Henrikh Mkhitaryan, Marko Arnautovic, David Luiz and Danny Drinkwater, while the twin short-termists Jose Mourinho and Antonio Conte squabbled over the services of an ageing Nemanja Matic.

But also events abroad, too. Real Madrid and Barcelona have paid nine-figure sums for Eden Hazard and Antoine Griezmann, the sort of Galacticos their Premier League peers did not pursue, but also 28-year-olds with diminishing resale value. The most extreme example of writing off a transfer fee in a quest for immediate glory was Juventus’ €100 million move for the 33-year-old Cristiano Ronaldo in 2018.

In contrast, the Premier League’s thirty-somethings commanded rather more reasonable fees. Arsenal will lose money on David Luiz and Aston Villa on Tom Heaton, but relatively little. The investments are just that: attempts to find resale value; to get players who could lock down a position for a decade; to bring in those whose careers are on an upward curve and who will improve.

Just consider the full list of the eight-figure summer signings, excluding deals agreed before, with their ages at the start of the season – whether for the younger Christian Pulisic or the more experienced Raul Jimenez, but also including Giovani Lo Celso, whose loan fee is reportedly over £10 million:

It reflects the way that several elements have combined. The appointment of younger managers with an emphasis on youth – Ole Gunnar Solskjaer in particular, but also Graham Potter, Ralph Hasenhuttl, Brendan Rodgers and, seemingly, Dean Smith, may have altered recruitment strategies. Meanwhile, some of those who favour experience – Mourinho, Conte, Tony Pulis, Sam Allardyce, Rafa Benitez, Maurizio Sarri – are either not in the division or, in Roy Hodgson’s case, not spending much.

Manuel Pellegrini, another not averse to signing seasoned players, bought younger than usual. Tottenham’s preference to acquire the up-and-comers may reflect Daniel Levy’s quest for profits, but ties in with Mauricio Pochettino’s coaching skills; Newcastle’s is definitely part of Mike Ashley’s enduring attempts to make money. The Magpies' past shows that his attempts to outsmart the market can go very right or very wrong. In a division where three clubs will go down, some spending sprees will be deemed failures, and in one where £1.4 billion was paid out this summer, some buys will backfire.

And yet the notion that the Premier League has more money than sense may be less true than usual. Perhaps lessons have been learned after money was lost in the past; perhaps strategy and scouting has taken precedence over fame and reflected glory. A group of clubs who have started to acquire reputations as good traders, whether Manchester City, Liverpool, Leicester, Watford or Wolves.

Now a host of new recruits in their late teens or early twenties have the look of astute acquisitions, either in the short or the long term: Kean, Sessegnon, Ndombele, James, Wan-Bissaka, Tierney, Tielemans, Cutrone, Pepe, Rodri. In many cases, they seemingly bought to suit a style of play, manager and broader plan.

This is not scattergun spending, with scarcely a thought for tomorrow. It may offer an element of future-proofing clubs. And if it means that they don't need to buy in their position in forthcoming years, or if they sell for sizeable sums, these could be the big buys who save their new clubs money.

Quiz! Can you name the last 50 players to score a Premier League hat-trick?