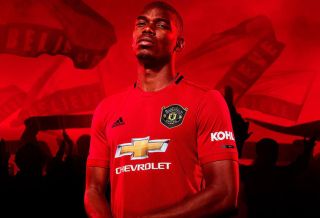 Manchester United’s shirt sponsorship deal with Chevrolet remains the most lucrative in the Premier League, according to figures from journalist Alex Miller (via @sportingintel).

The deal, first signed with the American car manufacturer in 2012, is now estimated to be worth £64 million per annum.

By contrast, Brighton’s partnership with American Express is the cheapest in the league, at just £1.5 million. However, the financial services company’s shirt sponsorship is part of a wider long-term commercial partnership with the Seagulls which includes naming rights to Brighton’s home stadium.

As usual, the figures highlight the financial disparity between the division’s ‘Big Six’ clubs and the rest. West Ham’s deal with Betway, the seventh-biggest in the league, is just 28.6% the value of Tottenham’s equivalent with AIA, in sixth.

Ten of the 20 principal shirt sponsors of Premier League teams in 2019/20 are gambling companies. Labour deputy leader Tom Watson has pledged to prevent football clubs from signing sponsorship deals with gambling companies in future, should his party come to power.

The global appeal of England’s top flight is underlined by the fact that half of the sponsoring companies are from Asia alone. Though many sponsors may not even operate within the UK market, the international audience that the Premier League attracts means such matters are mere inconveniences.

However, some of the deals have raised questions among industry observers. When Southampton signed their club-record £7.5 million p.a deal with the Chinese company LD Sports (a “brand new sports content, marketing and entertainment platform”), the company didn't have a functioning English website and was yet to launch in China. The Saints’ majority owner is Chinese businessman Gao Jisheng.

Everton’s shirt sponsor, betting platform SportPesa, recently withdrew all of its sport sponsorships in native Kenya after a tax dispute with authorities (a decision which does not affect international deals).

The figures below don't account for sleeve sponsors, if a separate company has purchased that space specifically, although Alex Miller notes that the combined values of Premier League clubs' deals for this is £51.8m for 2019/20.

QUIZ How many 2019/20 Football League clubs' nicknames can you recall?