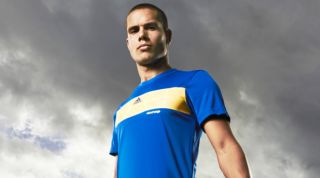 The last two years have been tough for Jack Rodwell.

Sure, during that time he’s earned himself a £12 million move to the then-Premier League champions and picked up three England caps – but it’s hardly been smooth progress for the talented 22-year-old.

You can be sure he’s seen enough of the treatment table, anyway. In the last two seasons Rodwell’s troublesome hamstring has kept him out on no fewer than five occasions, usually for at least a month and sometimes longer.

Last season’s debut campaign at Manchester City was supposed to be the industrious youngster’s platform for a leap into the big time – but a combination of injury niggles and a daunting battle for places hampered a campaign of promise before it ever really began.

So it’s no surprise Rodwell, fit again after a successful pre-season, is ready to play his part in City’s title tilt this time around.

“Last season was a bit disappointing as I was injured a lot, but I felt like when I played I impressed,” he tells FourFourTwo. “One minute I felt like I could do well, and the next it'd be difficult again, so I hope this season I can just stay injury free.”

It’s a simple target, but could be the most important one in his relatively short career so far – especially with a potential World Cup on the horizon.

It’s another fresh start all round after Roberto Mancini’s unsurprising departure at the tail end of last season – and Rodwell is under no illusions of his task ahead, having not yet made an appearance this season.

“I don’t expect to play 100% and last 90 minutes every time,” the Southport-born midfielder admits. “But I’ve sat down with the manager and he wants me to play a lot of games.

“He obviously has players for each position and it’s a big squad. There are great players in my position so it’s just a case of taking my chance when I get it, keep training hard and staying focused.

“When a new manager comes in the place is lifted and everyone wants to impress. It’s a clean slate for everyone, really. Everyone’s on it and they want to impress him. It’s been a good mental change for every one of the players.”

Rodwell can certainly take heart from his performances towards the end of last season. After returning from injury he started three of City’s final four games of the campaign and ended a difficult year with both goals in their final-day defeat to Norwich.

City were poor in their attempts to retain their first-ever Premier League title last term, making Mancini’s sacking inevitable. But you won’t find Rodwell knocking the man who brought him to the Etihad last summer – even if he admits the Italian’s exit was for the best.

“He’s a great manager with great pedigree,” says Rodwell. “He signed me too, so obviously had a faith in me.

“The fans loved him because he’d done really well for City and won their first title in a long time. It was just time for change. But for me he was a good manager, a good person and I’ve got nothing but positive words to say about him.”

How Rodwell will fit into Pellegrini's regime this season remains to be seen, but it’s likely he’ll be the next port of call in central midfield should the Argentine decide to rest either of his other two all-action midfielders, Fernandinho and Yaya Toure.

While the club’s new boss arrived in England with a reputation for 4-2-3-1, Rodwell believes the less restrictive midfield set-up City have demonstrated so far this season will serve him well once his opportunity arrives.

“In the first game of the season we played a 4-4-2 so the manager might change it up for different opponents,” says the former Everton workhorse.

“I like to play box-to-box and use my energy a bit more, rather than be nailed on as a holding midfielder and just stay behind the ball. I like to get forward as well as back.

“Hopefully I’ll get that role and a chance to show everyone what I can do.”

Roy Hodgson, no doubt, will be among those taking notes.