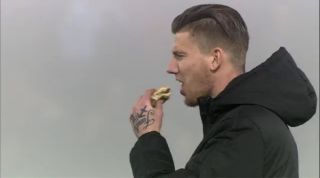 In December, Kramer was fined and handed a one-match suspension for eating a sandwich on camera at half-time during a Dutch Cup clash against Heracles. Remember Wayne Shaw, anyone?

Now at his new club, Kramer has offered up all the players and staff an unusual incentive to stay in Holland's top tier.

"If we stay up, everyone who works at Sparta will get a sandwich from me," Kramer told Metronieuws after his first training session at Sparta’s Het Kasteel stadium.

The incident has become known in Holland as "croquette gate" with the feeling that Kramer pulled the stunt to force a move away from the club. He rejected the notion and insisted there was nothing more to say on the matter.

"You call it 'croquette gate' but I already knew that my time was up at Feyenoord," Kramer told FOX Sports. "It was not a statement at all. If I wanted to leave, I'd prefer to confront the coach rather than do it this way.

"I did not care how I got that croquette sandwich. There has been enough said and written about it."

Sparta currently sit bottom of the league on 14 points after 23 games played.