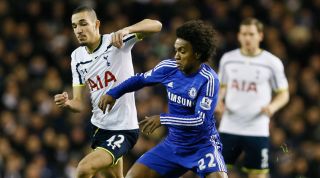 During his half-season in charge of Tottenham Hotspur, Tim Sherwood became renowned for his amusing public pronouncements, with one of his most famous quotes concerning the composition of Spurs' squad.

"I couldn't tell you what my best team is and I don't know whether that's good or bad," Sherwood said towards the end of his tenure. "I have assessed the players more than anyone and I could not tell you the best 11 players at Tottenham. They are all so similar, much of a muchness regarding their quality. I'm not sure there's any hierarchy. Some of the guys are quite similar in the way that they play. We need different types of midfield player, for instance."

In that department, Tottenham had Sandro, Paulinho, Etienne Capoue, Mousa Dembele, Lewis Holtby and Gylfi Sigurdsson to choose from. Christian Eriksen was clearly on a different level, and deserved a regular starting place, but it was difficult to tell who Spurs should be basing their midfield combination around.

Sherwood, however, introduced Nabil Bentaleb shortly after taking charge, and the 20-year-old Algerian has enjoyed a rapid rise since being handed his debut in December 2013. Since then, he's represented Algeria at both the World Cup and the Africa Cup of Nations, and despite plenty of competition for his place at club level, has become a midfield regular alongside fellow academy product Ryan Mason. For all of Spurs' midfield transfer activities in recent years, it turns out their best hopes were right under their nose.

Bentaleb was perfect for Spurs, not merely because he has the potential to grow into a genuinely top-class midfielder, but because he has a clearly defined role in the side.

Whereas it's sometimes difficult to work out what Paulinho is all about, and Dembele's game is hindered by an astonishing weakness with his final ball, there's no messing about with Bentaleb.

He's a defensive midfielder: someone who sits deep, breaks up play and distributes the ball intelligently into attack. He's a physical presence, reads the game well, and offers positional permanence in a side based around rotation in more advanced zones. Defensively, Bentaleb's style is hard but fair.

He wins the ball regularly, averaging 2.4 tackles and 2.5 interceptions so far this season, but 0.6 fouls per game indicates he rarely makes poor decisions with these interventions. He's happy to play a holding midfield role in the pressing-based system Mauricio Pochettino favours.

Whereas other players in his role prefer scrapping on the edge of their own box, Bentaleb is happy to push up the pitch and make quick interceptions to recover the ball immediately, in a manner reminiscent of Sergio Busquets.

INTERVIEW Bentaleb: "Pochettino trusts me. I'm hungry to learn and he teaches me every day"

This was obvious in the recent narrow 3-2 defeat to Liverpool at Anfield, where the majority of his ball winning took place close to the halfway line.

Bentaleb is also positive with his distribution. When he first started playing for Spurs, his passing was safe and reliable, but this wasn't what new manager Pochettino wanted.

He likes his players to attack quickly, to transfer the ball into the attacking players immediately, and in the recent 2-2 draw with West Ham it was notable how frequently Bentaleb played the ball into Erik Lamela and Harry Kane, rather than hitting square passes out wide.

And, while Bentaleb is predominantly a defensive midfielder and it's difficult to imagine him being deployed higher up the pitch, he's capable of contributing in an attacking sense too.

In the 2-1 win over Arsenal he had a few attempts at goal – admittedly wayward – but more crucially crossed to Kane for the famous winner.

This weekend's Capital One Cup final could be the opportunity for Bentaleb to reach a different level.

With Chelsea's Nemanja Matic suspended following his retaliation against Burnley, Bentaleb should attempt to command the midfield zone with his powerful ball-winning and positive passing.

For a player who made his debut only 14 months ago, a starring performance this weekend would seal a remarkable rise towards becoming one of the Premier League's best midfielders.