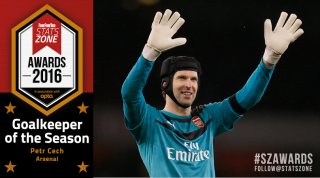 It feels like a very long time since Chelsea boss Jose Mourinho worried that his champions may have handed their title to Arsenal by selling them Petr Cech, whom John Terry reckoned was worth an extra “12 or 15 points a season”.

The theory was that a solid goalkeeper was the only thing between Arsene Wenger’s side and the Premier League crown, which was otherwise the Blues’ to lose. Things didn’t work out quite that way, especially at Stamford Bridge, while Cech’s arrival couldn’t take Arsenal from thereabouts to there.

But a goalkeeper can’t be held fully responsible for the shortcomings of his team and Cech has certainly done his bit. He made 101 saves, a total topped by only three Premier League goalkeepers – which says a lot about Arsenal’s defence: the Gunners' backline conceded more shots per game than top-five rivals Tottenham, Manchester City and Manchester United.

Cech’s two rivals for this award were Leicester’s Kasper Schmeichel and Manchester United’s David de Gea. The Czech edged the clean-sheet total with 16 to the others’ 15 – pending Manchester United’s rearranged game with Bournemouth – and the Czech made more saves, had a higher save percentage overall (76% to 73% for the other two) and from shots within the 18-yard box (72% to 67%).

Arsenal’s only senior summer signing, Cech started in the usual fashion – a clean sheet and a trophy as his old side were beaten 1-0 in the Community Shield – but drew some questions after his first home game, a 2-0 defeat to West Ham in which he misjudged a Dimitri Payet free-kick for Cheikhou Kouyate’s opener.

However, the next Emirates experience exemplified his excellence: Liverpool were held to a 0-0 draw despite eight accurate efforts, Cech spreading himself superbly to deny Christian Benteke’s close-range effort before arching to tip Philippe Coutinho’s curler against the post.

Another five saves kept a clean sheet in October’s 3-0 win over Manchester United, and later that month he was impeccable on his European debut for the club. Having been controversially rested in favour of David Ospina for the Gunners’ first two group games – both lost – he proved his class by making six saves as Arsenal defeated Bayern Munich, including a reflex stop from Thiago and an athletic block on Arturo Vidal.

He also made six saves in December’s 2-1 home win over Manchester City and January’s 0-0 at Stoke (Wenger: “Cech was outstanding”). A week later at the Emirates, he saved five of Chelsea’s six efforts on target as the Blues won 1-0 and the Gunners lost what turned out to be their last chance to regain top spot.

Find out the Stats Zone Awards' other big winners

If Arsenal are ever to be in pole position on the only table that matters – the final one – they will need to fill more positions with players of Cech’s quality.