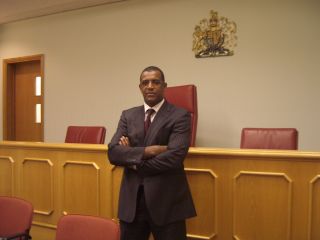 “When I was playing, I wanted to break the circle of just wasting my time playing golf and snooker after training. I was always aware of my own intellect, but the problem with being a footballer is that you can’t convince anybody that you’re intellectual. That was certainly the case when I was in the game because the two didn’t go hand-in-hand. The only way you could convince them was to get yourself a degree.

"I did an Open University degree in Business Studies. I chose that because I didn’t know what discipline I wanted to go into after football and it gave me a broad subject area. I ended up in law because I found it was more interesting than all the other disciplines – plus my wife was a lawyer, so there would often be legal discussions in the household.

"Players used to take the mickey out of me, but it didn’t bother me because I could see that you wouldn’t still be playing at 40. You need something to get up for in the morning and there are lots of ex-players out there who’ve got no purpose in life now they’re out of football. Gazza, who I played with at Newcastle, is a good example of that.

"I did the majority of my degree at Huddersfield and then I had to study at Nottingham University, which has the best reputation for law. You study all aspects of law when you’re doing your degree, then go on to do your ‘articles’ at a firm of solicitors. I joined Andrew Jay & Co in Gainsborough in 1995 and qualified four years later. I’m still with the same firm, but I’m now in the Lincoln office.

"I specialise in crime. It’s an area I enjoy and people say it’s the most interesting part of law. In other areas, you might sit in an office all day. When you’re doing crime, you spend a lot of time out of the office. You can be in court, representing your client during a trial, or going to a police station. We have a rota at the firm, taking it in turns to be the solicitor on call at the police station.

?"You’ll definitely receive phonecalls if you’re on duty on Saturday night, but you might not have to go to the station because people who’re arrested that night are usually very drunk. They’re left to sleep it off and you have to see them on the Sunday. It’s a very stressful job because the clients you have are very demanding. If they’ve been charged with something and they’re in custody, the only thing that interests them is getting out. They can be quite rude and abusive to you.

"I was quite a unique person for the PFA because I don’t think they’d had anyone study law before and they helped me by funding my course fees and paying for things like a computer and books. If a footballer expresses interest in a career in the legal profession now, the PFA send them to me for advice.”

Interview: Nick Johnson. From the June 2008 issue of FourFourTwo.