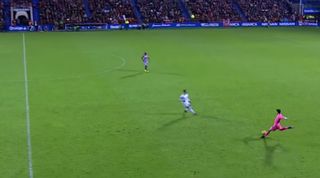 In Spanish Segunda Division action on Saturday night, Carlos instinctively launched the ball upfield with 10 minutes left to play and Lugo already 2-1 up.

But instead of the net-minder's effort flying high, wide or into his opposite number's hands – as it probably would 99 times out of 100 – Carlos watched as his rifled strike looped over a back-pedalling Diego Marino and into the net.

The Lugo players celebrated wildly with their heroic goalkeeper, who admitted after the game that his fine effort was a mere fluke.

We'd have been convinced had you claimed you meant it, Juan. Honest.