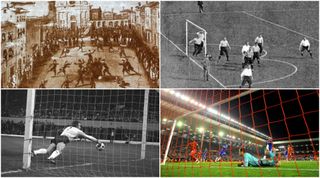 "It’s just a couple of posts and a crossbar,” Paolo Di Canio once pointed out to FourFourTwo as he bounded around Swindon Town’s training ground. “But for a footballer, it is paradise.”

The Italian wasn’t wrong. The whole game is focused on this rectangle of thin air, framed by wooden or aluminium beams and a mesh of netting. The evolution of the goalmouth, however, has been a long, argumentative and occasionally lethal process.

Perversely, football has existed for much longer than goals. The sport’s distant ancestors did involve feet smacking a sphere, but the zones towards which their shots were propelled varied wildly.

Chinese documents dating back to 2500BC mention youths booting objects through holes in a cloth stretched between sticks. By the first century BC, this had evolved into zu qiu, still the word the Chinese use for football, and tsu chu, in which competitors aimed at fabric affixed nine metres off the ground (Stoke City may have been pretty useful).

Other variations involved striking six crescent-shaped boards or a pole, and bai da, in which points were awarded for committing the fewest errors, rather than actually hitting anything.

Koreans and Maoris devised versions with one post in the middle of a field, while Japan’s kemari was a glorified round of keepy-uppy. Around 200AD, Roman armies indulged in harpastum, a pastime that involved kicking a ball but was more about knocking seven gladiatorial bells out of each other than taking it anywhere.

The Aztecs had laced-up leather footballs and practised trying to slot them through holes in a wall – a bit like Soccer AM’s ‘Road To Wembley’ feature for soap actors and members of Kasabian.

Shrovetide football throughout Middle Ages Europe, meanwhile, was more hooliganism than Association rules: huge gangs of beered-up yokels propelling an inflated bladder using fists, feet and sticks. In many instances, the ‘goal’ was the rival town’s church – an easy target for any out-of-form forward – but often there was no real tactical aim beyond an enjoyable spree of communal mayhem.

The first mentions of a physical goalmouth are credited to writers John Norden and Richard Carew in the late 16th and early 17th centuries while describing Cornish hurling, a rule-free rugby-style rampage using a small silver sphere (quidditch without flying, basically). Carew described the construction of something totally new. “Two bushes in the ground, some eight or 10 foote asunder,” he wrote, “they terme their goales.”

The goal is born

“I’ll play a gole at camp-ball,” wrote John Day in 1659’s The Blind Beggar of Bethnal Green. Camp-ball was another early invention that focused strongly on face-punching and eye-gouging – but unlike Italian calcio, in which the objective was to get violently from one end of the pitch to the other, it had a target.

By the end of the 17th century, the idea was commonplace. A Sutton Coldfield play area was described in Francis Willughby’s Book of Games as having “a close that has a gate at either end. The gates are called goals.” The game was on.

But it would take the organisational prowess of the British public school system for something resembling the modern goalpost to evolve. At the fabled 1848 meeting at Cambridge University, teachers from Eton, Harrow, Marlborough, Westminster, Shrewsbury and Rugby – each of whom had developed different variations of the sport – sat down to thrash out the ‘Cambridge Rules’.

As well as allowing goal-kicks and banning handling, they decreed that a ‘goal’ should be awarded when a ball was put through upright flagposts and underneath a string.

The size of the goal continued to fluctuate until the newly-formed Football Association hammered down the rules. In 1863 they deemed that posts should be eight yards (24 feet) apart, which remains the official width of a goal to this day.

Something still needed to be done about the upper limit of the space, though: there was no initial height specification, meaning many clubs didn’t bother with a string and allowed a strike between the sticks scored 30ft up in the air.

Tape eventually replaced string, notably at the first ever FA Cup final in 1872; and in 1875, experiments with crossbars began. Sheffield FC and Scottish club Queen’s Park both claim to be the first to have used one; it’s likely they did so independently at roughly the same time.

The crossbar was made compulsory in 1882, marked eight feet above the ground, but construction quality was an issue. In 1888, Kensington Swifts were disqualified from the FA Cup after one of their horizontals was found to be lower than the other and Crewe Alexandra complained.

Sheffield United’s William ‘Fatty’ Foulkes (a big-boned goalkeeper who once quipped: “I don’t mind what they call me, as long as they don’t call me late for lunch”) broke a bar by swinging off it during an 1896 fixture.

Major disagreements sprang up thanks to the inadequacy of the target. Though the game was played by gentlemen, teams simply couldn’t agree whether efforts had gone in, and internationals found themselves bickering like narky kids.

Ireland protested fiercely – although perhaps pointlessly – that the ninth of England’s goals in a 9-1 romp had gone over the bar. Four years on, it was England’s turn to gripe as Ireland grabbed a 2-2 draw in Belfast – but keeper Joe Reader insisted that Willie Gibson’s late Irish leveller had gone past the post.

The solution was inspired by John Brodie’s trousers. The Liverpudlian engineer decided he was going to eliminate the squabbling by inventing “a huge pocket”. By 1891 his prototype was complete, and goal nets were trialled in Nottingham.

The first player ever to ripple one was Everton forward Fred Geary. (There must have been something in the air that day: referee Sam Widdowson went on to invent shinpads.) Brodie’s innovation was soon accepted into the official laws and was used in the 1892 FA Cup Final.

The newly-netted goalmouth was still imperfect, though, and disputes continued. Long before Geoff Hurst’s World Cup moment, the referee missed a bounce-out that would have seen West Brom promoted in 1909, while Aston Villa were relegated in 1970 following a similar error.

Many will recall a Clive Allen effort for Crystal Palace in 1980 that boinged in and out off a stanchion; the official was convinced it had hit the upright.

Square goalposts, particularly popular in Scotland, also brought heartache. In the 1976 European Cup Final, a header from Saint-Etienne’s Jacques Santini rebounded off the horizontal with the score 0-0. Fans of Les Verts remain convinced that, had the crossbar been rounded, the shot would have gone in.

Alas, a sharp corner foiled them: Bayern Munich grabbed a second-half winner instead, and fans of the French club still curse “les poteaux carres” of Glasgow.

The square designs were eventually banned by FIFA in 1987, and the round version has also been gradually replaced by an elliptical shape created by the Standard Goals Company in Nottingham. Precision is absolute: crossbars today are curved slightly upward in order to counteract gravity, which naturally pulls the central section downwards. Douglas fir has also been superseded by aluminium as the material of choice.

What does the future hold for the goal? Safety is one issue that still needs work. Collapses of badly-constructed, heavy steel structures in parks have been responsible for the deaths of numerous children over recent decades, and a campaign spearheaded by Brenda Smith, who lost her son to such an accident, is ongoing.

The Government, FA and British Standards have been slow to react to pressure to make park goals safer, according to John Wilson, whose company, ItsaGoal, make lightweight versions. “We’re hoping that changes to the law will be made soon,” he says.

In the professional arena, world-quaking alterations are unlikely. When Sepp Blatter brayed to German magazine Stern in 1996 that “the guardians of the rules are in agreement to lengthen the goals by the diameter of two balls, around 50cm, and to increase the height by the diameter of one ball”, there was such uproar that the plan was immediately shelved.

Is it such a stupid idea? The average male was around a foot shorter than today’s average Premier League goalkeeper (6ft 3in) when the rules were drawn up, so perhaps not. But few fans can entertain such meddling with tradition.

Adjustments continue: Brendan Rodgers changed Liverpool’s nets back to an ’80s-style red. And there is actually little in the laws to stop clubs tinkering more. But while goals as an object will never be as fascinating as the act of scoring them, for footballers and fans, they’ll always be home – and, as Di Canio says, a slice of paradise.

This feature first appeared in the December 2012 issue of FourFourTwo magazine. Subscribe!

Goals: they're beautiful aren't they? This article is part of FourFourTwo's partnership with BetVictor and their Million Pound Goal campaign. It's your last chance to win the guaranteed £1,000,000. Place a min £5 bet and predict the #MillionPoundGoal. See here for more.