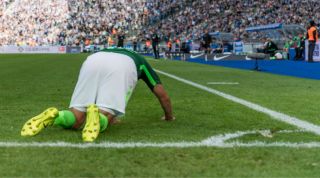 With Werder Bremen drawing 1-1 against Hertha Berlin in the 77th minute, what the visitors could really have done with were some decent deliveries into the area.

Max Kruse took responsibility from the corner – but as he went to strike an outswinging ball into the mixer, he slipped on his standing leg and crashed to the floor. Goal-kick.

The 29-year-old's unfortunate error was met with customary jeers from the home support, while Kruse forced a wry smile mixed with bemusement at what had just happened.

Oh dear!Max Kruse's teammates won't let him forget about this one September 10, 2017

The contest finished all square. And with Werder not set to play their next opponents Schalke until Saturday, that gives Kruse plenty of time to review his studs.