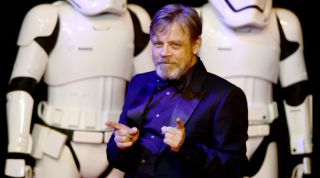 Hamill liked a tweet sent to him by a Wolves fan, thinking it was in reference to actual wolves.

But that simple mix-up is what quickly escalated into Luke Skywalker pledging his allegiance to the club in a matter of hours.

Having seen Hamill's like, fan group Wolves Fancast tweeted the Star Wars actor asking whether he was a fan.

Hamill replied: "I am now. Never heard of them until 2 days ago. All because I "liked" a tweet from a #Wolves fan & they made me feel like family. Very nice!"

Wolves, who currently sit third in England's second tier, reached out to their new fan by confirming the force was strong at the Championship club.

Wolves beat Millwall 1-0 on Saturday courtesy of a fine strike by Diogo Jota. Perhaps the Portuguese playmaker has been spending some time at the Jedi academy too...