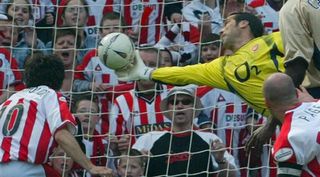 What actually makes a great save?

Dozens and dozens are made each weekend, many of those with far reaching consequences, and yet few live in the memory for more than a few hours. Where does the longevity come from, then? What gives a save the kind of permanence which allows it to endure, vividly, for years?

Rio Ferdinand reveals his greatest ever Manchester United game... was a 0-0 draw

The language around goalkeeping is bland. Pundit Land is populated by former outfield players, meaning that the position is rarely given more than cursory glance. They’re either being lavished with hyperbole or harpooned by criticism, and always within discussions tent-pegged by truisms being taken too literally.

It’s a world in which the near-post is sacrosanct and anything other than a catch is a flap, meaning that we can’t rely on pundits to distinguish between the magnificent and the mundane. Fans are no better, either, as we tend to overstate anything which protects a narrow lead or an important draw. Think of David Seaman’s standing parry in the 2002 World Cup group game against Argentina, for instance, or nearly any stop made by a lower-league goalkeeper in the early rounds of the FA Cup.

Context isn’t irrelevant, but situational importance only has the loosest relationship with technical excellence. We’re looking instead for a criteria which exists independently of the score, the meeting of which allows a save to live on, long after the result of a game has been forgotten.

Anybody who has ever kicked a ball can differentiate between a rudimentary block and a “claw” out of the top-corner. Generally, the closer a goalkeeper is taken to his physical and mental extremities, the better his save is. Remember that Nigel Martyn save from the Match of The Day title sequence all those years ago? Exactly – that. Body arching, spine stretched, the body at its elastic limit.

Recovering from being wrong-footed is also a plus, so too is reacting to a deflection – particularly one which loops over a ‘keeper, forcing him to scamper back and dig the ball out from underneath his own crossbar. But there’s room for more simple excellence, too: watching power neutered by an iron wrist is always satisfying, so too is almost any kind of double- or even triple-save.

The commonality is the expectation that a goal should have been scored. A chance presents itself, everybody in the ground and watching on television knows that a goal is about to be scored, and yet somehow the ball doesn’t hit the net.

Consider this, by Liverpool's Adrian in this year's Champions League group-stage.

Or this, by Hugo Lloris:

Perfect. The fans are already celebrating, gamblers are already counting their winnings and yet somehow the score doesn’t change. In each case, less a save, more a glitch in the matrix - and caused by a goalkeeper doing something physically unexpected. Reaching a bit futher, stretching a bit higher, adjusting in an unusual way. It's something a bit strange, which needs to be watched again immediately to be properly understood.

How did Lloris smuggle that ball under his body while still keeping it the right side of the line? How did Adrian hang in the air long enough to get that kind of purchase on the ball?

There is nothing more descriptive than the expression of a spurned forward.

This may now be a world of Expected Goals and cold, dispassionate measurements, but football will always be a sensory game and, as such, hands-to-the-head or disbelieving glances will always be a subliminal, but reliable measure of what has actually taken place.

At the head of this list is Ole Gunnar Solskjaer’s reaction to being denied by Jens Lehmann. Arsenal were protecting a 1-0 lead at Old Trafford in the middle of the last decade when, five minutes before the end, Solskjaer cut inside and drilled a flush half-volley around Johan Djourou and towards the far corner.

It’s a really good example because, actually, the side-on angle didn't really describe it properly. It just looked like a good save originally, almost routine, but Solskajer’s reaction gave it an entirely different frame. It drew attention to how well struck his shot was, to the complication created by Djourou’s position and, obviously, to how quickly Lehmann reacted and how strong his fingertips were.

Football is an outfielder’s game and many of the platitudes around goalscoring betray that. A forward “gives the ‘keeper no chance” or “leaves him helpless” and that characterises the relationship well. They are protagonist and victim, not equals, and rarely is that dynamic inverted.

When it is, though, the results are spectacular:

Joe Hart's save from Federico Fernandez hardly needs embellishment. The way he hung in the air and then managed to divert the ball up and over the crossbar was - genuinely, in the truest sense - amazing. It's a calibre of stop matched once or twice a season at most.

But if it did need further testimony, then it came from the reaction of every Swansea player caught in shot during the seconds after.

That's six professional players standing in disbelief. Six players who have the highest expectations of their opponents' performance and rarely exhibit anything close to surprise on a football pitch.

Attacking moves always sound the same. The anticipation flares as they build. The noise gets more consistent and louder as they develop. Then, as the ball breaks or a forward cocks his foot, there's that micro-second of silence just before the shot is actually struck, followed immediately either by the gushing release of tension or a whole choir of groans. It's remarkably consistent, regardless of outcome.

But a goalkeeper has a chance to interfere with the ratios - to make the rising expectation last slightly longer and alter the pitch of the disappointment. A when he does, it's the most perfect sonic description. The better the save, the sharper the audible contrast.

In the example below, everything had already been turned up to eleven. Tottenham and Chelsea had fought to the end of a preposterous 4-4 draw and White Hart Lane was aching for a winner. When the ball broke to Dimitar Berbatov in stoppage-time, there it surely was. The right player in the right place at the right time, to give the game a proper ending.

But then: Carlo Cudicini. Note how close White Hart Lane gets to a crescendo and then how quickly that euphoria rushes away and out into the night.

It was indicative of so much. Berbatov’s ability in front of goal and the expectation that he would score, of course, but also Cudicini’s role. Great games deserve definitive endings, so the crowd's reaction was - naturally - a response to being denied that scripted finale. But it was also drawn by the goalkeeper's strange technique - that one jutting arm - and the strength of Berbatov's contact. It looked wrong. Even after the outcome there appeared no rational explanation for how the ball had stayed out and the Lane's anguish was the sound of injustice and disbelief, not just disappointment.

That's some power to have over a crowd.

A save is made; the ball goes out of play; eyes drift to the screen. As the replay is shown, a gentle gasp floats out from the stands.

Next to an away goal being celebrated, a crossbar being thudded and the net clinking at the Amsterdam Arena or the Westfalenstadion, that's one of the best noises in football. It’s also one which connects two sets of fans. Almost everybody in a stadium has played the game at some level, meaning that - very occasionally - really excellent play commands a spontaneous, basic form of respect. Grudging or otherwise.

Like Cristiano Ronaldo’s goal against Juventus in the Champions League, for instance, or – more recently – that bending Emre Can shot which draw applause from all four sides of the BayerArena.

In this context, though, appreciative murmurs are reserved for not only truly excellent goalkeeping, but also saves which have a hidden difficulty or texture. The replay might show a tiny deflection, perhaps, or the graze of fingertip which wasn’t seen in real-time. Whereas the live reaction is dictated by a game’s imperatives - the score, the points, the league table - that delayed noise is more educated and reflective. It's tens of thousands of people tipping their hats to a player at exactly the same time.

The sort of reaction which might have greeted this, had Colombia not scored from the resulting corner.

"Did he touch that?"

What are these? Clues, really.

While we know how to treat goals from thirty yards, certain types of header, or specific volleying techniques, those templates don't really exist for goalkeepers and, as a result, their contributions are much harder to measure.

In a game where one position is routinely denied proper inspection, these are the indicators of quality. Vague, sensory tests which every great save will probably meet in one way or another.

QUIZ Can you name the 44 teams Frank Lampard played against in the Premier League?