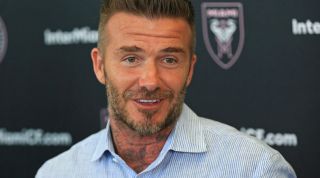 Club Internacional de Fútbol Miami may have only been founded in 2018, but it took them just months to find themselves fierce rivals of one of Europe’s global superpowers. Unfortunately, this rivalry didn’t form on the pitch – Miami haven't played a single game yet.

The Miami franchise - set up with David Beckham and Spice Girls manager Simon Fuller (because of course) – named their team Inter Miami to reflect the multiculturalism of the Florida city, despite Inter Milan filing a US Patent and Trademark application in 2014 to make “Inter” its exclusive brand in the US.

The MLS itself filed a notice of opposition to Inter Milan’s claim, stating that since “Inter” was a common prefix – Internacional in Brazil, Inter Leipzig and Inter Nashville being three examples.

Since the MLS admitted that the word “Inter” was so common though, the US Patent and Trademark Office declared that Inter Miami couldn’t prove valid ownership over the name. Oops. The legal fight is set to continue later this year.

Adidas vs the public's knowledge of their logo

The three stripes of Adidas was so iconic that Johan Cruyff - who wore Puma apparel - refused to be associated with the brand, famously tearing a stripe from each of his sleeves whenever he wore a Netherlands jersey made by the sportswear giant. Still, it wasn’t iconic enough, at least according to a court in the EU.

In 2014, Adidas were granted a trademark on “three parallel equidistant stripes of identical width” to be applied on clothing, hats and shoes. It didn’t take long though for the general court of the EU to declare that three stripes wasn’t sufficient to identify an Adidas product.

There’s a fine line between minimalism and distinction, but it seems a little too fine for Adidas. In 2003, they lost a dispute with Dutch brand Fitnessworld, who were using a similar two-stripe motif.

David isn’t the only Beckham face a legal dispute with an established football club - though not one of Internazionale’s size and stature (sorry, Peterborough United).

In 2002, the Beckhams were still the most exciting thing in the world of celebrity culture and their brand was extending its reach globally. Victoria - or Posh, to Spice Girls fans - attempted to trademark her nickname, but faced opposition from Peterborough, claiming it would severely impact them if they weren’t allowed to use the nickname on merchandise.

Despite Victoria claiming the nickname had “become synonymous with her on a worldwide basis”, she lost her case, with the League 1 side having a good 70-year headstart on the singer. The Posh’s nickname actually comes from an advert in the 1920s that asked for “posh players for a posh team”. Now you know.

UKIP vs The Premier League

The @premierleague will be thrilled. https://t.co/GWXBcjL5vH— Gary Lineker (@GaryLineker) September 29, 2017

The Premier League appeared to mind being associated with the right-wing political party, however. A spokesperson for the Premier League told the Guardian at the time that their legal team was well aware of UKIP’s new emblem and that they were exploring potential copyright breach.

The design caused quite the stir - with questions raised around why the anti-immigration party hadn’t opted for an animal native to Britain - but three years after the announcement, UKIP still haven’t reverted from the famous pound sterling motif.

Plenty of footballers have celebrated goals over the years by forming heart shapes with their fingers - not least Angel Di Maria. But it appears Gareth Bale has monopoly over the hand gesture after trademarking it in 2013.

Prior to his huge move to Real Madrid, Bale applied to protect his celebration and tie in his shirt number 11 for merchandising purposes. So whilst any footballer can still form a heart with their fingers after scoring - knock yourself out, Angel - it serves only to promote Brand Bale.

Despite Bale not releasing much merch with his “Eleven of Hearts” gesture adorned - it does bear a similarity with 2000s American pop group 3OH!3’s logo - the trademark does mean that the Welshman can prevent others from releasing copycat products.

With a new deal signed with Nike and the rise and rise of Jurgen Klopp’s red army showing no signs of stopping, the branding opportunities of Liverpool Football Club appear to be limitless.

The Reds failed however in their bid to trademark the word “Liverpool”, given that the government’s Intellectual Property Office claimed the “geographical significance” of the city couldn’t be ignored. So essentially, the club can’t take ownership of the word and stop products that use the city’s name. Given how famous Liverpool is stateside for The Beatles, for example, that seems fair enough.

Despite the defeat, Liverpool claimed that they would continue to “aggressively pursue large-scale operations which illegally exploit our intellect property.” Liverpool FC, that is. Not Liverpool the city.

One advantage that Arsenal have over Liverpool in regards to branding is that they aren’t named after the place they’re from. Originally Woolwich Arsenal when the club were situated in South London, the club rebranded when moving north of the river - to The Arsenal, before dropping the “the”, Facebook-style.

In the late 90s, Arsenal were involved in an interesting case with market stall tradesman Matthew Reed, who was selling unlicensed club souvenirs outside Highbury. Whilst the High Court sided with Reed, claiming that there was no evidence that his customers would assume that his merchandise was official, the European Court of Justice disagreed, declaring that the use of logos amounted to trademark infringement.

Arsenal subsequently appealed against the High Court’s ruling and won. “I’m still an Arsenal fan,” Reed later claimed, after reportedly having to pick up the legal costs. “Unfortunately it’s one of those things you are born with.”

Dulwich Hamlet vs their landlords

In 2018, sixth-tier Dulwich Hamlet weren’t the ones telling someone else not to use their name - the 127-year-old football club were instructed via a cease and desist letter from property investment fund, Meadow Partners, to stop using the name “Dulwich Hamlet” along with “Dulwich Hamlet Football Club”, “The Hamlet” and “DHFC”.

Meadow, who also owned Dulwich Hamlet’s ground, evicted the club from its home of 106 years, with the somewhat hipster outfit taking to social media to call the move “petty”. The Hamlet were forced to sleep on a mate’s sofa, so to speak, temporarily moving in with rivals Tooting & Mitcham until December 2018.

Luckily, the club and their landlords reached a settlement, but Dulwich are still looking to move stadium in the future.

Barcelona's crest vs an EU court

Barcelona are one of the most recognisable clubs in the world, but could you recognise their badge by just its outline?

No. Well, at least not according to an EU court ruling from 2015. “None of the characteristics of the sign at issue contains any striking feature which is liable to attract the attention of consumers,” stated the court, in what some may have seen as a passive-aggressive, low blow towards the Barca design team.

“In fact,” the court added, going straight for the jugular, “the mark sought will rather tend to be perceived by consumers merely as a shape and will not enable them to distinguish the proprietor’s goods or services.” Just us football nerds at FFT that recognise that silhouette, then?

Messi vs his own fame

How Lionel Messi finally became the player he was expected to be (no, really)

He burst onto the scene in the mid-2000s as a floppy-haired, precociously-talented teenager, but it wasn’t until 2018 that Lionel Messi registered his own name as a trademark - because an EU court ruled that he was too famous to be confused with other businesses.

Messi first tried to trademark his own name in 2011 for use on sports clothing, with cycling goods company Massi filing an appeal claiming a “likelihood of confusion”.

"It seems unlikely that an average consumer of those [Massi] goods will not directly associate, in the vast majority of cases, the term ‘Messi’ with the name of the famous football player," a court later ruled. No word yet on whether the Barcelona star plans to release cycling gear, though.

EXCLUSIVE Rio Ferdinand reveals his greatest ever Manchester United game... was a 0-0 draw

QUIZ Can you name Jose Mourinho's most played players at Chelsea, Manchester United and Tottenham?