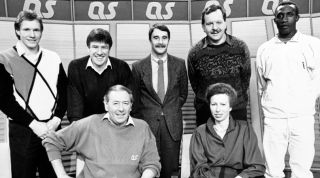 With a hefty 710 matches under his belt, Steven Gerrard sits third in Liverpool's all-time appearance list. And, like the others who made more outings for the Reds than they've had plates of Scouse, Stevie G now has to decide what to do next.

Management? Punditry? Getting touchy-feely with royalty? Here's what nine other Liverpool legends did next after the roar of the Kop finally died away...

After clocking up 857 appearances and a frankly ludicrous number of medals (17 all in), the underrated midfielder left Anfield aged 36 and thoroughly enjoyed himself, winding down his career in the USA with Fort Lauderdale and Australia with Canberra City.

Yet just to show that Cally was still up for a challenge, he played under former team-mate John Toshack at Swansea as they surged up through the leagues, before clocking off at Crewe in 1982 at the grand old age of 40.

A boyhood Everton fan, Carragher notched 737 turnouts for Liverpool, the highlight coming in the Reds' incredible defeat of Milan in the 2005 Champions League Final.

Despite collecting some coaching badges and appearing in the England U17 dugout a year ago, Carra has thus far eschewed a managerial career, declaring: "It chews people up."

The ex-centre-back has instead preferred to work as a Sky Sports pundit alongside Gary Neville, whose horror stories about his ill-fated spell as Valencia coach may well convince the ex-Liverpool stalwart to remain in the studio for the foreseeable future. Nobody would mind – he's good at it.

After a glittering Anfield career spanning 11 trophy-laden years, Clemence opted for a move south to Tottenham in 1981, where he won the FA Cup a year later.

After a short spell managing Barnet, Clemence became a highly respected goalkeeping coach with the FA and worked under England managers including Glenn Hoddle, Sven-Goran Eriksson and Roy Hodgson.

'Clem,' who was also a regular radio football pundit, finally retired in 2013, his influence as great in coaching coaches as it had been during his playing days.

Although he claimed "Everything will be an anti-climax after playing for Liverpool", Emlyn 'Crazy Horse' Hughes packed a lot in after finally calling time on his Anfield career when approaching his 32nd birthday in 1979.

Not only did he win the League Cup as Wolves skipper, he also player-managed unfancied Rotherham to within four points of promotion to Division One in 1982.

It was, however, his TV appearances as captain on A Question Of Sport (which included giving Princess Anne a squeeze in 1987) and forthright opinions – delivered in his trademark high-pitched voice – that Hughes remains best known for in his post-Liverpool career.

"I've had a wonderful career both inside and outside of football," insisted the bullish former Liverpool and England skipper, shortly before he died from a brain tumour in 2004.

Having plundered an incredible 346 goals in 660 appearances for the Reds in two spells between 1981 and 1996, Rush's goal touch disappeared after leaving Anfield. Unsuccessful spells at Newcastle, Leeds, Sheffield United, Wrexham and Sydney Olympic featured only occasional net-ripplers in the four years up to his retirement in 2000.

After initially injecting some life back into former club Chester City as coach in the 2004/05 campaign (despite former Liverpool team-mates suggesting his natural shyness would be a hindrance), Rush resigned following a disappointing string of results a few months later.

He lost out on the Peterborough job to former Liverpool team-mate Mark Wright and has since done odds and ends in the punditry world for ESPN, Sky Sports and LFC TV, before returning to Liverpool as soccer school ambassador.

After occupying the right-back spot at Liverpool for over 11 years and making 650 apperance, Neal took on the toughest of post-Anfield assignments by joining fallen giants Bolton Wanderers as player-manager in 1985. Four years later, the Trotters suffered relegation to the Fourth Division for the only time in their history.

Neal then lasted 18 months as boss of Premier League Coventry (where he oversaw a famous 4-0 win over eventual champions Manchester United), but he's perhaps best remembered for his role as Graham Taylor’s hapless assistant during England’s ill-fated quest to reach USA 94, preserved for its ghoulish posterity on the Impossible Job.

Next page: Who bought the Cavern Club?

Anfield hardman Smith may have been “quarried, not born” according to Bill Shankly, but after bowing out of Anfield after the last of his 638 games in the 1978 European Cup Final, Smith meandered his way to Swansea via Los Angeles, where he played 12 matches for the Aztecs.

At the Vetch Field he helped Swansea gain promotion from the old Third Division under the tutelage of former Liverpool striker John Toshack. Smith attracted controversy for his comments on black players (especially former team-mate Howard Gayle) in the late 1980s, dabbled in coaching and wrote a weekly column for the Liverpool Echo until 2014.

Smith also purchased the lease to the Cavern Club in 1980, but ditched it after making minimal profit. In 1996, Smith’s benefit payments (he suffered from arthritis in his knees and hips) were temporarily stopped after he took a penalty in a half-time charity game during the FA Cup final between Liverpool and Manchester United.

During his colourful and sometimes controversial 13-year career at Anfield, goalkeeper Grobbelaar turned out on 628 (always memorable) occasions, winning 19 medals for Liverpool.

The Zimbabwean shot-stopper played for no fewer than nine other clubs following his departure in 1996; one of those was Southampton, a spell which coincided with him being accused of match-fixing by The Sun after being caught on videotape discussing rigged games.

The tabloid appealed after Grobbelaar was initially awarded £85,000 in damages, which led to the House of Lords slashing his award to £1 and ordering him to pay costs of £500,000, a ruling that left the player bankrupt.

He's managed several clubs in South Africa since retirement, as well as appearing on an episode of Hell’s Kitchen and most recently working alongside Paul Dalglish as goalkeeping coach at Canadian side Ottawa Fury.

What REALLY happened to Ali Dia? FFT on the trail of the Premier League's worst player

9 managers who returned to former clubs – and what happened next

Over the next three years, the Scot was linked with managerial jobs at Huddersfield, Manchester City and then Liverpool in 1994, but chose instead to work for the BBC – firstly on the radio as a pundit, then for Match Of The Day as the Premier League era began.

During his 22 years on the show he was famed for his (often) withering analysis of defences’ capabilities, and combined his TV work with penning columns for the Daily Telegraph. Hansen even found the time to pop up on Walkers Crisps and Carlsberg adverts.

“I always thought football management was a mug’s game," he said when he retired from punditry in 2014. "I pondered it a while back, but I wouldn’t touch it with a bargepole.”