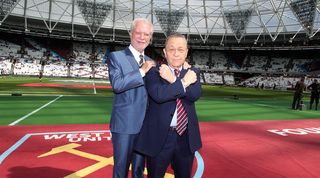 From a distance, the London Stadium looks every inch the sporting venue it's supposed to be. Walk towards it from the Westfield Shopping centre and its eclipsing size and radiant video screens will take you in. Cranes loom in the distance and on every side theres's evidence of sprouting modernity; yep, this is a place of great progress.

But the stadium, like its tennant football club, looks better from afar. The impression inside the ground is of just enough having been done to make it feel like West Ham's home. Andy Carroll's thundering volley has been stencilled onto the fascia, the club's crest beams out over the London skyline, and the colours appear with enough frequency to be convincing.

But step closer and see what a strange sort of home this is. The stewarding and segregation issues have been well covered and the team's form hasn't helped with the transition, but there's something incurable in the air; an irritation, maybe, or perhaps even regret? There's a very real sense that nobody actually wants to be here and that those who do are engaged in self-deception.

The stadium's press box sits high up, almost in the atmosphere, affording a view so detached it's almost voyeuristic. But it's a revealing perspective: it shows the gaps between the tiers and the incongruous details which were likely never considered during the planning phase.

Shortcuts are becoming a theme at West Ham.

One of last summer's great sagas involved the club's hunt for a forward to smash across the stadium's bows. Bold promises were made and transfer targets were callously leaked onto social media by the ownership's children; the club were newly rich and wanted the world to know. Even, ridiculously, the clubs they intended to negotiate with.

Across Europe they traipsed, £31m cheque in hand, but with no joy: Alexandre Lacazette passed, Michy Batshuayi said no and only Simone Zaza could be convinced to join – but even then only on loan.

Still, a player people knew: a name. Regrettably, that seemed to be the priority. Not the creation of a balanced squad nor the systematic curing of its weaknesses, but the pursuit of a 'sit up and take notice' moment – and a set of headlines.

Until as recently as January 2017, the club were taking the bizarre step of publishing transfer intentions on their own official website. The Insider column, presumably birthed by nepotism, was both staggeringly naive and a transparent attempt to dictate the news cycle.

It has subsequently been put out of its misery, but its memory helps guards the perception of amateur decision-makers bumbling through an ultra-professional world.

West Ham's transfer policy has been vague for some time, with no clear indication as to how powers are separated and decisions are made. What's more clear, however, is that they have grown increasingly less efficient under joint-chairmen David Gold and David Sullivan.

According to transfermarkt.com, the club have made a net loss on all their market activity in each season from 2011 onwards. The last time they recorded a net profit was 2010, but that was a reality obfuscated by the sale of Carlos Tevez, the true beneficiary of which remains unclear.

11 times ArsenalFanTV made regular supporters question everything they know about football... and life

It's troubling for two reasons: firstly, although the loss itself is largely offset by the current broadcasting contract, West Ham don't appear to have received much in return for their expenditure. They have re-emerged from relegation and become relatively safe within the top flight, but there's little evidence of progression in the sides they construct.

They are built for seasons rather than eras and rarely mature into more than the sum of their parts.

Secondly, they only occasionally buy or develop players who become desirable to other clubs. They may have recently sold Dimitri Payet back to Marseille at a healthy profit, but there are few other players in the current squad, barring Winston Reid and Michail Antonio, who would definitively command fees greater than their purchase price.

Losing players is galling for supporters, but still a necessary part of healthy Premier League life. As too is the elevation of academy prospects which, once a club hallmark, has become a rarity.

While not damning, it's certainly indicative of dysfunction and, when compared to the strategy of clubs like Southampton, Everton and Tottenham, casts West Ham's recruitment in an unflattering light. Clubs of their size and standing naturally prioritise progression up the league table, but generally also defer to certain imperatives. Players are important, but so too are assets.

Loans, when not bookended with a permanent contract, represent pure loss: a fee is due to the parent club, wages are paid out (possibly shared), and those costs can never be recovered through a sale.

The only real benefit is in performance itself and, perhaps, through the achievement of certain short-term objectives. They are, in effect, stigmata of an organisation seeking quick bounce rather than a more gentle or sustainable progress. In this case specifically, West Ham have almost universally been unsuccessful: with the exception of Song (reported wages: £140k per week), none of the aforementioned players left a trace of impact at Upton Park.

Worse still, the past isn't obviously instructing the present: 2016/17 delivered another batch of costly, pointless loan deals, with neither Jonathan Calleri nor Gokhan Tore faring any better than Zaza.

Regrettably, this transfer malaise neatly frames what West Ham are: a club with plenty of ambition, but who are either unsure of how to satiate it or incapable of doing so. The 2016 off-season was a pertinent example of just that: they had the wherewithal to be bold, but floundered like a club who hadn't really planned their steps. And that, unfortunately, is a thread which binds much of their activity, from their recruitment to their stadium delivery, and is reflective of an operating procedure which continues to create problems.

In the absence of a more considered culture, they appear to have become overly reactionary, with organisational energies sapped by the need to firefight this never-shortening list of issues. There is always either an unhappy player, a crippling squad shortage, or a logistical or PR battle which needs plotting. Progressive clubs tend to radiate calm, logical order, whereas West Ham seem to exist in mild chaos.

There is always some kind of drama.

8 reasons why everyone hates... Chelsea

FourFourTwo's football preview: What will and won't happen this weekend

These needn't be terminal problems. Irrespective of the mood surrounding the London Stadium tenancy, it has lifted the club into a theoretically advantageous situation. Without the enormous overheads involved in constructing a ground (and the planning issues that would have been faced in the East End), they have been defaulted up the food chain.

That will count for little, however, unless clear thinking prevails and they allow themselves to be led by a coherent ideology. If they don't, they will continue to stumble around this world, unsure of whether they actually want to be a successful side or just to walk around with a strut.

West Ham remain one of this country's great clubs, garnished as they are by substantial history and enviable tradition, but that identity has never been weaker than it is right now. The gap between what they are as a club and what they should be is, unfortuantely, as broad as the chasm between the London Stadium's pitch and its stands.