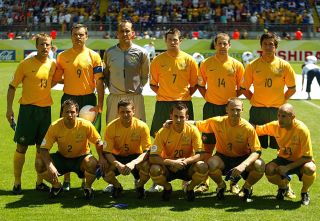 The former Middlesbrough and Fulham No.1 currently holds the record for most caps with Australia (109) and is the only non-British player to make more than 500 appearances in the Premier League.

He was also the first player to win back-to-back Premier League titles with two different sides, despite not playing a single minute for either team, when he won the league with Chelsea in 2014/2015 and then Leicester City the following season.

He retired from international football in 2013, after representing Australia at the World Cup in 2006 and 2010, and is widely regarded as a Socceroo legend thanks to his performances in helping his country qualify for Germany and then reaching the knockout phase for the first time. These days, Schwarzer is an eloquent pundit for the BBC.

Moore carved out his professional career at Scottish side Rangers before playing for Borussia Monchengladbach and Newcastle, and was the rock in Australia’s defence when they qualified for the 2006 World Cup.

The centre-back retired from both club and international football in 2010 after Australia crashed out of the World Cup group stage on goal difference.

Neill is Australia’s longest-serving captain, having held that honour for seven years. He amassed 61 caps as skipper from after the 2006 World Cup to the end of 2013, appearing in the 2010 World Cup and then retiring from international football three years later.

A mainstay in Australian colours alongside Moore, Neill spent more than a decade in England plying his trade for Millwall, Blackburn Rovers, West Ham and Everton before making the move to Turkish Superlig side Galatasaray in 2010 and ending his playing career at Watford in 2014.

In 2016, however, Neill was declared bankrupt in the UK after a slew of failed investments cost him his Premier League fortune. He has remained out of the public spotlight ever since.

The versatile attacker is a household name at Basel, having spent the majority of his professional career with the Swiss Super League side. In his first season there he helped the RotBlau to their first league title in 22 years, as well as the Swiss Cup.

But for all his offensive prowess, Chipperfield played at left-back for the Socceroos and after Australia’s final group game in the 2010 World Cup, announced his retirement from international football.

With 80 caps, Wilkshire is the eighth most-capped Socceroo of all time and is still playing – currently with Sydney FC in the A-League – having transferred there from Dynamo Moscow at the end of the 2016/17 season.

The 36-year-old’s career has been full of highs and lows – from being called up to Australia’s 2006 World Cup squad despite struggling for game time at third-tier English side Bristol City; being named Australia’s highest-paid footballer in 2012 when he was playing with Russian outfit Dynamo Moscow; to being cut from the 2014 World Cup squad by current coach Ange Postecoglou, and dropped by Feyenoord manager Giovanni van Bronckhorst in 2015 for being overweight.

Emerton spent three seasons at Feyenoord, winning the UEFA Cup with De club aan de Maas in 2002, and then a decade at Blackburn before retiring from competitive football in 2014 following a stint with hometown club Sydney FC.

Capped 95 times for the Socceroos, Emerton was a key midfielder in Australia’s ‘Golden Generation’ and played in two World Cups – 2006 and 2010.

The ex-Rover is now working as an ambassador at Football Federation Australia.

Defensive midfielder Grella spent 10 seasons at Empoli, Parma and Torino and another four at Blackburn before moving back home to play for Melbourne Heart in 2012, eventually retiring a year later.

He played almost 200 matches in Serie A and won 46 caps for Australia, playing in the 2006 World Cup and 2007 Asian Cup, then retiring from international football before the 2010 World Cup. He now works as a player agent based in Italy.

A close friend of Grella, the duo played together in Italy at Empoli and Parma. Bresciano has featured at each of Australia’s last three World Cups and has 84 caps to his name, best remembered by his equaliser against Uruguay in the 2006 World Cup qualification play-off – which the Socceroos eventually won on penalties.

The midfielder spent more than a decade in Italy before moving to UAE side Al-Nasr in 2011, ending his career at Qatar’s Al-Gharafa in 2015.

Despite completing a sports director’s course in Florence last year, Bresciano is taking a break from football and focusing on his family in Melbourne.

Midfielder Culina spent 10 years of his professional career in the Netherlands, playing for Ajax, Twente and PSV Eindhoven, winning the Eredivisie title three seasons in a row with the latter.

He was capped 58 times in his six-year career with the Australia senior team, and ended his playing days at A-League side Sydney FC in 2013.

The former Leeds, Liverpool and Galatasaray forward surprisingly has only 56 caps to his name for Australia, despite officially being named the country’s best ever footballer in a 2012 vote. Former Leeds team-mate Danny Mills also called him the “Gareth Bale of his time”.

Kewell represented Australia at two World Cups and two Asian Cups, famously scoring the equalising goal against Croatia in the final group match of 2006 that took the Socceroos into the second round. Sadly, he was forced to miss the last 16 match against Italy due to injury.

The 39-year-old is currently head coach of League Two side Crawley Town.

Captain of Australia’s 2006 World Cup team, the ‘V-Bomber’ first rose to prominence with Celtic before joining Leeds and becoming a pivotal part of their Champions League semi-final run in 2001.

The forward scored 67 goals in his 156 appearances over four years for the Whites, then helped Middlesbrough reach the UEFA Cup final in 2006. He ended his career at Newcastle in 2009 after playing at St. James’ Park for two seasons.

Viduka now coaches the Melbourne Knights’ youth sides, who count one of his three sons among their ranks.

The Everton legend was in hot water for a controversial celebration after scoring Australia's winning goal in World Cup qualifying against Syria, leading to speculation that FIFA were considering investigating what was a sponsored move.

But that minor blip aside, Cahill is Australian football royalty and continues to perform at a high level despite the fact he will turn 38 next month.

The only member of the 2006 World Cup squad still playing for his country, the attacker has more than 100 caps to his name – second only to Schwarzer. He also became Australia’s first ever scorer at a World Cup when he netted a brace in the opening 3-1 victory over Japan in Germany.

Cahill is Australia’s top goalscorer of all time with 50 to his name, and will be looking to increase his tally when the Socceroos face Honduras in the upcoming two-legged play-off.

The 6ft 4in striker spent almost a decade in Germany, playing for Wolfsburg, Cologne, Dynamo Dresden and Nuremberg among others. He then transferred to J-League side Nagoya Grampus in 2009, where he stayed for five years and scored 63 goals in all competitions.

Kennedy has 36 caps for Australia, featured in the 2006 and 2010 World Cup squads, and scored a late winner in his country's final 2014 World Cup qualification match against Iraq to help them secure a spot in the finals.

But despite making their squad for the 2014 World Cup, he was eventually cut from the team in Rio due to injuries.

The final season of Kennedy’s 15-year career was played at A-League side Melbourne City in 2015.

Currently manager of A-League club Brisbane Roar, Aloisi’s name is etched in Australia sporting history after he scored the winning penalty against Uruguay that granted them a spot in the 2006 World Cup.

In a 20-year career that led Aloisi through spells in Belgium, Italy, England, Spain and finally Australia (for Melbourne Heart), the striker scored a total of 147 goals in 459 club appearances.

He also spent nine years in the Australia senior team, racking up 27 goals in 55 appearances.

After his first and only season for Melbourne Heart in 2011, Aloisi became their youth coach for a year and assumed the position of head coach until 2013 – before Brisbane Roar came calling in 2015.

The Dutchman sparked enormous excitement when he became Socceroos coach in 2005, going on to guide them to World Cup qualification and then into the second round.

Hiddink, who had previously led South Korea to the semi-finals of the 2002 World Cup, fondly became referred to as ‘Aussie Guus’ for his record-breaking exploits with the Socceroos.

His next stop was guiding the Russian national team for four years, which included reaching the semi-finals of Euro 2008, followed by stints with Chelsea, Turkey and the Dutch national team.