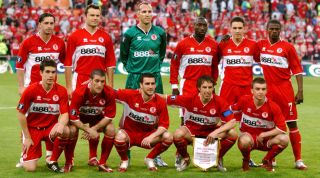 They may have been, according to their own travelling supporters’ chorus, "Just a small team in Europe" - but any lack of continental stature didn’t stop unfashionable Middlesbrough from making their mark in the UEFA Cup under future England manager Steve McClaren.

The 2004 League Cup Final win over Bolton at the Millennium Stadium in Cardiff provided the passport to European football for Boro – and how they enjoyed the journey, reaching the last 16 of the competition during their first foray. The following season, having qualified via the Premier League, they humbled the likes of Stuttgart and Roma, then most dramatically Basel and Steaua Bucharest.

Boro met more than they bargained for in the final when they were swept aside 4-0 by a Sevilla side managed by future Spurs boss Juande Ramos, and featuring a relatively unknown Dani Alves. However, McClaren and his players were still able to leave the European stage with heads held high.

The Australian saw it all in his 11 years on Teesside, where he played 446 times for Boro following a £1.25m deal from Bradford, sampling everything from relegation and cup final anguish to promotion and League Cup glory. One highlight was saving Robbie Fowler’s late penalty on the last day of the 2004/05 season in a 1-1 draw with Manchester City that put Boro on course for Eindhoven.

After falling out of favour with new manager Gareth Southgate, he upped sticks to join Fulham where he tasted defeat in the 2010 Europa League Final, and was still a sought-after personality to have around dressing rooms way beyond turning 40. He was part of Chelsea and Leicester squads that won Premier League titles in consecutive years as back-up, and is believed to have become both clubs’ oldest ever player before retiring at the age of 43.

Now based in Surrey, Schwarzer keeps himself busy as an intelligent pundit on the BBC and Australian television.

The versatile full-back came through the acclaimed Boro academy - where dad Dave was manager - to become an England Under-21 international and a regular face in the first team under McClaren, although his progress was hampered by a series of injuries.

He eventually left for Birmingham but liked Middlesbrough so much he came back during Tony Mowbray’s reign, before moving to Hartlepool where he retired from playing two years ago. He's since returned to the Vic as 'prehab/rehab and conditioning coach’, while also running his own conditioning business called Parnaby Performance.

The England Under-21 international was first tipped to leave Derby for Liverpool, before rocking up at Middlesbrough with team-mate Malcolm Christie. He soon won over the Smoggies in just his second appearances for his new club, scoring two goals in a 3-1 win over neighbours Sunderland at the Stadium of Light.

Still, despite the promising start, the centre-half had a job on his hands to oust Ugo Ehiogu from his starting slot, but after missing out on the 2004 League Cup Final he stuck to the task and was rewarded with the UEFA Cup final place. After being forced to retire due to a back injury while at Burton Albion, Riggott headed over to the USA with his family. He now lives in Las Vegas and coaches Heat FC in southern Nevada.

The first and probably most inspired signing of the McClaren era, it was Southgate who had the privilege of hoisting aloft the first major trophy in Boro’s 128-year history following the 2004 League Cup Final win over Bolton.

This guarantees an affectionate place in Teesside folklore for the centre-half who played 57 times for England. That’s saying something, because he took over as manager from England-bound McClaren after the Sevilla defeat, despite being unqualified and doing the job, one former colleague said, “with one arm tied behind his back” as owner Steve Gibson tightened the purse strings.

Boro were relegated and he was suddenly – and many feel unfairly - shown the door, to be replaced with Gordon Strachan. But Southgate bounced back and will put his wits against his successor on the touchline later this year as England manager in a World Cup qualifier with Scotland.

“I used to make my team-mates laugh, but not always intentionally,” Queudrue told FFT with a self-deprecating humour that made him a hit with the fans, players and staff alike at Boro in a spell that started with a £2.5m move from Lens in 2001. His stay effectively ended in Eindhoven, where he pulled a Boro shirt on for the last time before joining Fulham.

‘French Franck’ gained a reputation for being hot-headed, which led to disciplinary problems and saw the left-sided defender rewarded with what was supposed to be crate of champagne – and turned out to cider - from coach Steve Harrison after going a season without a sending off. He’s now back living in northern France, working with his former agent, Dominique Six, hooking up the right players with the right clubs – especially in England.

The Sevilla game may have proved to be too much, too soon for the teenage winger, but it didn’t hold him back for too long. Eleven years later, at the age of 30, he's still going strong in the midfield trenches of the Premier League with West Brom and in international football with Scotland.

Boro manager Southgate ignored right-hand man Harrison’s pleas not to let Morrison go and bring in the more experienced Gary O’Neil. But off he went - “devastated” according to his friends - to The Hawthorns in a £2.2m deal when Baggies boss Tony Mowbray came calling 10 years ago this summer. It's a bit of business that still reflects badly on the England boss.

They’ve always had a thing about Brazilian midfielders at the Riverside, which probably explains why they went to Barcelona to sign the skilful, hard-working Rochemback (whose trademark was one of those deft, no-look passes).

Rochemback, who broke into the Brazil national side as a teenager, played a crucial role in the dramatic UEFA Cup quarter-final win over Basel, while his long-range free-kick was the highlight of an 8-1 win over Manchester City in the Premier League in 2008.

Nowadays, he is back in southern Brazil where he has taken up horse-breeding, rearing the criollo breed.

The final may have passed by the combative Dutch midfielder, but the £5m deal struck with Aston Villa in 2002 is still regarded as one of the club’s best bit of business of the modern era. Boateng became club captain once Southgate was elevated to the manager’s office, before his old team-mate reversed the decision and made Emanuel Pogatetz his skipper to let Boateng focus on playing duties.

After spells at Hull and Nottingham Forest, Boateng launched his managerial career with Malaysia Super League side Kelantan, but poor results meant he didn’t last long. He's now to be found commentating on English and Dutch football, and also scouting for Villa.

If only manager McClaren had done his homework properly and warned Downing about the merits of the right-back he would be up against that night in Eindhoven, he might have fared a bit better against one Dani Alves. The brilliant Brazilian snuffed out the threat posed by an opponent whose deadly crossing ability proved crucial in the semi-final win over Steaua Bucharest.

That said, Downing didn't let the anticlimax get to him and had a distinguished career that's yielded 35 England caps and moves to Aston Villa, Liverpool and West Ham.

Yet they say you should never go back and the former England winger’s experience would suggest that’s true. The 32-year-old has just suffered relegation for the second time with his hometown club - and his falling-out with former Boro boss Aitor Karanka didn’t help matters.

The Australia international is one of the club’s most gifted players ever but, along with Alen Boksic, also remains one of the most enigmatic people to have pulled on a Boro shirt. This helps explain why he ignored club owner Gibson’s personal calls to stay at the club while on a family holiday in Croatia when his contract expired a year after the UEFA Cup showpiece event. He went on to join local rivals Newcastle, before ending his playing career in 2009.

His former Boro team-mates expected Viduka to launch a new career in football after he successfully gained UEFA coaching qualifications, but he's yet to make a move and is currently living in Surrey - and one of those people who changes his mobile number without telling anyone.

The Netherlands international was brought in on a free transfer from Chelsea by McClaren to add experience to the Boro ranks as they embarked on their first European adventure, and it proved to be a bold but shrewd investment. He scored 34 times in 89 games over two years before bidding farewell after the Sevilla defeat.

He was credited with helping the likes of up-and-coming players like Downing and Morrison flourish (“They were great talents but if didn’t get the ball over quickly enough, I told them in no uncertain terms,” the Hasselbaink told FFT).

The Dutchman has shown plenty of potential himself as a manager with Royal Antwerp and Burton Albion, before an ill-advised and ill-fated move to QPR which resulted in his dismissal last November. He’s now looking to return to management but only, he insists, “with the right club”.