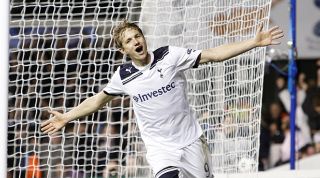 Nine years before last Wednesday’s mesmerising tussle at the Etihad, Tottenham Hotspur were involved in another thrilling Champions League tie in which they lost the away leg 4-3 but went through.

I was at San Siro that night, and it was indeed magnificent. But for me, a standout moment of that tie was the goal from Roman Pavlyuchenko during the return leg at White Hart Lane, when the Russian forward swept home an inch-perfect cross from Bale following yet another devastating run by the Welshman. (Maicon might as well have retired by this point.)

That goal put Spurs 3-1 up on the night, ahead in the tie, and all but confirmed that they were going to knock out the mighty Internazionale. A glory glory night indeed.

The goal summed up why I loved – and still love – the striker known as Super Pav in this half of north London. He was frustrating, infuriating and, sometimes, utterly brilliant.

This was an international centre-forward who didn’t make a huge fuss about not playing every week, fitting into a rotation of four strikers and forming effective partnerships with Jermain Defoe, Robbie Keane and Peter Crouch. His goal return of 20 goals from 78 Premier League appearances wasn’t great, but not awful either.

He was, though, more than anything, a man for the big occasion. Spurs’ 2010/11 Champions League run might not have happened at all if Pavlyuchenko hadn’t intervened. With Harry Redknapp’s side 3-0 down on Young Boys’ synthetic pitch in their qualifying play-off, it looked like being all over before it had begun.

But then Seb Bassong powered in a header, before Pavlyuhenko came up with a crucial strike. He lashed a shot home from an almost impossible angle, giving Spurs a priceless second away goal and making their task at White Hart Lane rather more straightforward.

Pavlyuhenko also scored a rare winner for Spurs against Liverpool in November 2008, turning home in the 90th minute to inflict the Reds’ first defeat of the season and lift Tottenham off the foot of the table. He’d missed a golden chance minutes before – a perfect microcosm of his Spurs career.

The Russian also bagged an April 2009 winner against West Ham, which will earn any player a place in Spurs fans’ hearts.

At a club that has boasted forwards like Jimmy Greaves, Jurgen Klinsmann and Harry Kane, Pavlyuchenko is never going to be considered one of the greats. But he contributed to some special Spurs moments, and deserves to be remembered for those with affection.

QUIZ! Can you name the 35 current Premier League players who made their debut in the competition 10+ years ago?