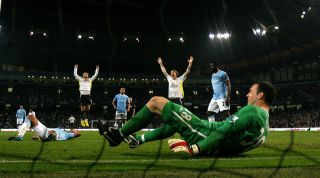 Two decades before Tottenham were hit for six at the Etihad, they travelled to Bramall Lane in the Premier League’s maiden campaign.

Sheffield United were fighting to avoid relegation, and to make matters worse their north London opponents were in fine form, having won their previous five league games thanks largely to the scintillating form of Teddy Sheringham who'd netted nine times in that run.

This should have been a comfortable victory, then, and it was – but not for Spurs. Franz Carr opened the scoring for the Blades with a brilliant finish after bamboozling two markers with a slick turn, before a comical headed own goal from defender Andy Gray set the tone for a Tottenham collapse.

Ten minutes later they were 4-0 down via an Ian Bryson brace. Brian Deane and Paul Rogers completed the rout, but Spurs chairman Alan Sugar stopped short of firing Doug Livermore... until the end of the season, anyway.

The 1998/99 season started well for both sides, who went into this London derby unbeaten. The Hammers raced into a three-goal lead after only 27 minutes thanks to goals from ex-Arsenal team-mates John Hartson and Ian Wright (two). The former would go on to sign for the Dons in January for £7.5 million, becoming their most expensive player ever.

Marcus Gayle pulled one back for the south Londoners but they went in at half-time 3-1 down. Joe Kinnear’s team talk clearly worked, though (apparently they used to) – his side dominated the second half.

An error from West Ham centre-back Javier Margas was gobbled up by Jason Euell, before another goal from Gayle brought the teams level. Then, with nine minutes remaining, substitute Efan Ekoku won it for the Dons to ensure their travelling supporters’ journey home on the District Line was a chirpy one.

Any game involving Harry Redknapp and the race for fourth place was destined to be a Sky Sports favourite, in a year the east Londoner had taken Spurs from the relegation zone to one game from the Champions League. The Lilywhites held a one-point advantage going into this top-four decider.

Crouch later atoned for his missed chances, heading in from a Younes Kaboul cross – it happened, OK? – which wasn’t dealt with by Fulop, sparking bedlam in the away end. The celebrations carried on in the tunnel afterwards, with David Bentley interrupting Redknapp’s post-match interview to pour a bucket of ice water over his head before dancing around in his Y-fronts.

ONE-ON-ONE David Bentley: "Harry thought I was being disrespectful. I did it because we all loved him so much"

City would avenge this match almost exactly a year later, winning by the same scoreline to qualify themselves, but Crouch’s goal led to Spurs' memorable run to the Champions League quarter-finals.

Manchester United had won their first title in 26 years, and Alex Ferguson’s quest to overcome Liverpool’s historical dominance was just beginning. But this game arguably demonstrated as big a difference in quality between these two teams as has ever existed in the Premier League era.

Liverpool were languishing in seventh, some 21 points adrift of their rivals from down the East Lancs road, who were also on a 17-game unbeaten run. United looked like strolling to No.18 after storming into a 3-0 lead within 23 minutes. But it didn't last long. Nigel Clough immediately chopped the deficit to two, then grabbed another before the break to give the Reds a fighting chance and help justify his £2.3 million price tag.

Neil Ruddock headed past Peter Schmeichel with 10 minutes left to ensure Graeme Souness's side grabbed a point, and Schmeichel a place in the dog house: the keeper later revealed he was temporarily sacked by a finger-pointing Fergie after the game, to which the Dane responded with “a lot of abuse”.

Arsenal would go on to win the title this year, in what was Arsene Wenger’s first full season at Highbury. Their games certainly offered value for money; the 3-2 home win against Manchester United has gone down as one of the best in league history, as did this early-season classic at Filbert Street.

Dennis Bergkamp was the star of the show, opening the scoring with a beautiful curled effort from a short corner, before adding another in the second half with a deft (if deflected) dink over Foxes keeper Kasey Keller.

The Gunners were coasting at 2-0 with six minutes of normal time remaining, until a botched attempt to clear a high ball fell to Emile Heskey, who pulled one back in the 84th minute. And when Matt Elliott scuffed in a deflected 93rd-minute equaliser, Leicester thought they'd secured themselves a point – but an even later moment of dazzling Bergkamp magic (below) meant their efforts looked to be in vain.

In the 94th minute, the Iceman juggled down David Platt's high ball over a perplexed Elliott before slotting home for his terrific hat-trick. Yet incredibly, Filbert Street wasn't to be silenced: Arsenal’s failure to defend a 96th-minute corner allowed Foxes captain Steve Walsh to power home an incredible leveller and cap one of the Premier League's most dramatic finishes ever.

Liverpool's title-challenging season of 2008/09 was chaotic. Rumours claiming Rafael Benitez had been sacked were reported by Sky Sports on the day they beat Real Madrid at the Bernabeu. They turned around a 2-0 half-time deficit to win at Manchester City. They went a goal down at Old Trafford to win 4-1. Amid the drama, Rafa's Reds always seemed to prevail – until this game.

Under normal circumstances, conceding a goal in the 90th minute to fall 4-3 behind and still come out with a point would be seen as prevailing. But not this time.

Arsenal new boy Andrey Arshavin put the Gunners 1-0 up at half-time, before two Dirk Kuyt crosses – one finding Fernando Torres, and another Yossi Benayoun – helped put the hosts in front. Two blunders from full-backs allowed Russian maestro Arshavin to complete his hat-trick, though, as he first dispossessed Alvaro Arbeloa before capitalising on a poor clearance from Fabio Aurelio. Torres scored his second equaliser soon after to tee up a nervy final 20 minutes.

In the 90th minute, Liverpool won a corner at the Kop end. The stage was set. But instead of sending the home faithful into raptures, the ball was cleared to a 20-year-old Theo Walcott, who sped the length of the pitch before providing for Arshavin to score his fourth. An even later Benayoun leveller was only enough to earn Liverpool a point, though, and although the draw put them top on goal difference, Manchester United's two games in hand – and late Federico Macheda winners – carried them to the title.

Before Sergio Aguero scored a certain goal in the 93rd minute, Martin Tyler’s most memorable line came from a late Stan Collymore winner. Even losing manager Kevin Keegan enjoyed it, confessing he was “elated” after the match despite his Toon side's title challenge having suffered as a result.

Robbie Fowler gave the Reds an early lead inside two minutes, but they soon found themselves behind thanks to goals from Les Ferdinand and David Ginola.

Fowler scored his second to level things after half-time, but once again Newcastle replied through Faustino Asprilla. Collymore equalised with 20 minutes remaining, getting on the end of a Jason McAteer cross.

Cue the injury-time drama: Ian Rush and John Barnes's interplay, “Collymore closing in” and Keegan slumped over the advertising hoardings. The scoreline would be repeated a season later when an injury-time Fowler winner eradicated Newcastle's spirited fightback in the dying stages.

LIST 8 big players who returned to their boyhood clubs