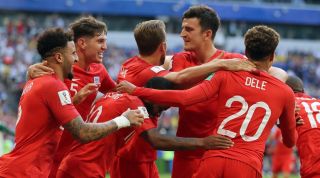 1. England outdo Sweden in the air

England's reputation as set-piece kings grew further on Saturday, as Gareth Southgate's side once again found the back of the net from a dead-ball situation. Harry Maguire rose highest to power home Ashley Young's corner in the first half, before Dele Alli nodded a second goal - this time from an open-play cross - past Robin Olsen after the interval.

This was the Three Lions' first clean sheet of the tournament, and they did a professional job against a Sweden side who had caused problems for all four of their previous opponents in Russia. Southgate and his coaching staff will now be drawing up fresh set-piece plans ahead of the semi-finals.

Russia were eliminated from the World Cup by Croatia, who will face England in the semi-finals on Wednesday. Denis Cheryshev's fine strike put the hosts in front in the 31st minute, but their lead was cancelled out soon after when Andrej Kramaric headed home Mario Mandzukic's clipped cross.

Domagoj Vida put Croatia ahead for the first time in the 100th minute, before Mario Fernandes levelled things up again in the second period of extra time. This was the first quarter-final to be decided by a penalty shoot-out, with misses from Fedor Smolov and Fernandes proving pivotal.

England's victory would have been celebrated with extra vigour by David Beckham, after the former Three Lions captain won a bet with ex-PSG team-mate Zlatan Ibrahimovic.

Beckham would have had to buy Ibrahimovic anything he wanted from Ikea had the Swedes emerged victorious, but he can now instead look forward to inviting the LA Galaxy striker to Wembley, where Ibrahimovic will be forced to wear an England shirt and eat fish and chips at half-time.

Belgium upset the odds to reach the World Cup semi-finals at Brazil's expense on Friday, with the Red Devils' 2-1 win leaving manager Roberto Martinez feeling like "the proudest man on earth." The former Everton boss was impressed with how his players carried out his instructions, praising their ability to follow "a very tough tactical assignment and the way they believed until the last second."

This is the first time the Belgians have reached the last four since 1986, but they're keen for their journey to continue beyond the semi-finals. "We have achieved something that is really beautiful and not easy," said Kevin De Bruyne. "[We] are happy, but once you're that close you want to do everything you can."

France goalkeeper Hugo Lloris believes his team must perform better in Tuesday's semi-final with Belgium than they did in their 2-0 victory over Uruguay on Friday. Goals from Raphael Varane and Antoine Griezmann were enough for Les Bleus to advance to the last four, but they didn't create many clear-cut chances from open play against Oscar Tabarez's men.

"To win the semi-final we need to play at a better level than we did against Uruguay," Lloris, France's captain, said. "We will be up against a great team with fantastic players. It will be a big, big fight and I hope we are ready for it.”

Tite did a magnificent job to guide Brazil to the World Cup in style, lifting the five-time champions from sixth place to top spot in the South American qualification standings. Yet the former Corinthians coach has been criticised following the Selecao's elimination at the quarter-final stage of the tournament, and there are now doubts over his future - although not in the mind of former striker Ronaldo.

"I think that Tite should stay," the two-time World Cup winner said. "He is a sensational guy and is doing a sensational job. His work has to continue. In fact, his responsibility should extend to youth football. And the Brazilian league needs to adopt the changes that he's seeking."