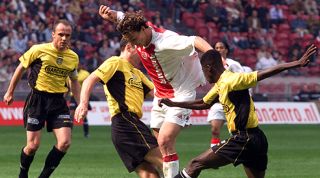 In 2004, I was at Ajax and Juventus were about to sign me. Rafael van der Vaart wasn't speaking to me because he said I injured him in training on purpose. I didn't.

When I entered the pitch for the game against Breda, the Ajax fans whistled me – they supported Van der Vaart. He was injured and couldn't play.

I did, scored twice and made four assists. For one of the goals, I received the ball with a defender on my back. Another tried to challenge me, but I kept the ball from both. Then I turned and saw the goal.

I was going towards the goal dribbling past players... "bam, bam, bam!"... as I searched for a moment to shoot. It didn't come, so I kept on going past different players. Then I was past the goalkeeper.

But I decided to go backwards to get a better angle to score. I went past the same player again. I used to play with him, but I didn't realise it! He said to me: "Zlatan, I thought we were friends..." I apologised because I didn't realise it was a former team-mate. It was my best goal.

Van der Vaart? His reaction was his problem. I didn't care. The next day I signed for Juve.