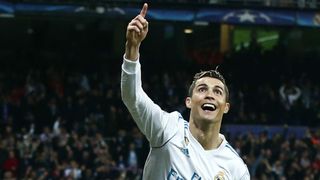 Cristiano Ronaldo became the first player to score 100 goals for the same club in the Champions League on Wednesday, his double helping Real Madrid to a 3-1 win over Paris Saint-Germain.

Ronaldo reached the milestone with a first-half penalty at the Santiago Bernabeu to cancel out Adrien Rabiot's 33rd-minute opener.

He then took his tally to 101 with a crucial second seven minutes from time, the five-time Ballon d'Or winner on hand to knee the ball home after Alphonse Areola parried Marco Asensio's cross.

In doing so, Ronaldo added another record to his growing list of individual honours.

Here, with the help of Opta data, we take a look at the numbers behind Ronaldo's sensational achievement.

116 – Including his Champions League goals for Manchester United, Ronaldo now has 116 in the competition.

101 – Ronaldo's 101 tally sees him four clear of Lionel Messi (97), while their nearest rival for Champions League goals for a single club is former Madrid icon Raul with 66.

95 – Ronaldo reached his century of Champions League goals in 95 appearances for Madrid.

10 – Although often thought of as deadly from set-pieces, only 10 of Ronaldo's 101 goals have been direct from free-kicks.

9 – Bayern Munich are Ronaldo's favourite opposition in the competition, he has scored nine times in six appearances for Madrid against the Bundesliga champions. Unsurprisingly Manuel Neuer has conceded all nine of those goals, making him Ronaldo's favourite opponent - an honour he shares with Johan Wiland (Malmo and Copenhagen).

4 – Borussia Dortmund, Juventus, Ajax and Schalke have all seen Ronaldo score seven time against them.