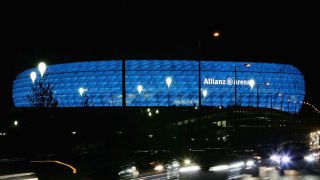 The lights will no longer illuminate blue at Allianz Arena after Bundesliga champions Bayern Munich cancelled the contract of beleaguered tenants 1860 Munich.

Bayern terminated 1860's contract on Wednesday following the rapid demise of their Munich neighbours – winners of the Bundesliga in 1966.

Former Bundesliga club 1860 lost a relegation play-off against Jahn Regensburg in May, which sent them down to 3. Liga, but failure to make a payment to the German Football League to secure their status in the division meant they dropped down further.

A statement from Bayern read: "The cancellation of the contract means the Allianz Arena is no longer TSV 1860 Munchen's home ground. The agreement precludes 1860 returning to the stadium at a later date."

1860 had called Allianz Arena home since its opening in 2004-05, sharing the stadium with Bayern.

Having previously held an equal share in the stadium, 1860 sold their half to Bayern in 2006 but they continued to host matches at the ground as a tenant.