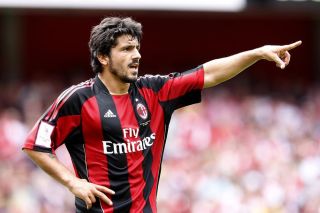 The bragging rights have swapped hands many times across the decades, with the Nerazzurri currently boasting the honours following their 1-0 win last October.

Here, Press Association Sport looks at five of the most memorable Milan derbies.

Nowadays the result at San Siro rarely hinges on more than a single goal, and scorelines are usually tight – no side notched more than once per game across a terse run spanning October 2012 and September 2015. But almost 70 years ago there was a record-breaking goal-fest at the Stadio Giuseppe Meazza. Earlier in 1949 the derby ended 4-4 and the rivals remained in deadly form when they met again in the autumn, with the action switching rapidly from both ends throughout, culminating in Benito Lorenzi giving the Nerazzurri a 5-4 lead as time ran out. Carlo Annovazzi restored parity until Amadeo Amadei completed his hat-trick to sneak it for Inter.

In January 2016 Milan fans unfurled a banner dedicated to Mark Hateley before a derby they would go on to win 3-0. Their large-scale tribute to the former England and Rangers striker was a throwback to the autumn clash of 1984, which memorably saw Hateley rise above Fulvio Collovati to head a winning goal beyond Walter Zenga after Agostino Di Bartolomei’s equaliser had teed up a draw.

The biggest winning margin in the history of the Derby della Madonnina was set almost 18 years ago. Neither side was threatening league leaders and eventual champions Roma but Inter were a much poorer team and crumbled completely as Gianni Comandini gave the Nerazzurri an early two-goal cushion. Milan ran riot after the break with Federico Giunti and Serginho notching either side of a quickfire brace from Andriy Shevchenko.

Inter partially avenged that 2001 hammering eight years later. The Rossoneri led their foes by five points in the fledgling table but that did not protect them from a vicious mauling by Jose Mourinho’s men. Thiago Motta put Inter ahead before Gennaro Gattuso’s dismissal allowed Diego Milito to double the away advantage from the penalty spot. Milan were reeling and Maicon and Dejan Stankovic helped deliver the sucker punch.

After spending over 200 million euros on players including Leonardo Bonucci and Andre Silva in the summer, Milan looked set to challenge Juventus for the Scudetto once more. Their bubble burst early on, however, with Inter striker Mauro Icardi – a modest 6.5million euro buy in 2013 – scoring a hat-trick to derail the Rossoneri campaign at any early stage. Spanish winger Suso had halved the deficit in the second half and Samir Handanovic’s late own goal set up a tense finale, which Icardi settled with a winner from the penalty spot. Inter’s pain was deep as they claimed the spot-kick award was soft.