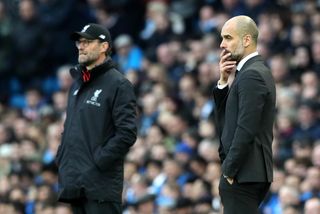 A memorable Premier League campaign comes to a conclusion on Sunday afternoon.

Here, Press Association Sport takes a look at five of the main talking points heading into the final weekend of a thrilling season.

Who will win the title?

After the most intense title battle for many a year, it comes down to the final weekend. Just one point separates reigning champions Manchester City and second-placed Liverpool heading into what is sure to be a thrilling final set of fixtures if the footballing week is anything to go by. Jurgen Klopp’s Reds secured a jaw-dropping 4-0 win against Barcelona on Tuesday night to reach the Champions League final and Anfield is sure to be abuzz again when Wolves arrive on Sunday. The Reds need to win and hope that Brighton can end a tough season on a high against Pep Guardiola’s men. Few expect City to come a cropper on the south coast but stranger things have happened… in the last couple of days alone.

Surely there will not be a top four shock?

A night on from Liverpool’s Champions League heroics, Tottenham produced an equally unthinkable comeback to seal their place in the June finale in Madrid. Lucas Moura’s hat-trick sealed the last-gasp comeback at Ajax and will mean Spurs line up at the gleaming Tottenham Hotspur Stadium with a spring in their step on Sunday. A top-four finish is all but assured but things would have to go horribly wrong against Everton to give Arsenal any hope. The Gunners, fresh from reaching the Europa League final, would have an eight-goal margin to make up at Burnley.

Spurs’ main focus will be getting the point that secures Champions League qualification but sealing third spot will also be an important marker – and impressive feat – given the issues they have faced this season. Chelsea are in the driving seat for third spot heading into the final weekend despite Maurizio Sarri dealing with challenges of his own during his first campaign in the Stamford Bridge hotseat. The style and substance of his side’s play has left a number of supporters frustrated but finishing third on the back of reaching the Europa League final will be quite impressive.

Cardiff to give Solskjaer a bloody nose?

Manchester United’s season ends as Ole Gunnar Solskjaer’s reign began. Fresh from being parachuted into Jose Mourinho’s spot in December, the Norwegian opened his caretaker stint with an eye-catching 5-1 triumph at former club Cardiff. That result kicked off a remarkable run that led to Solskjaer landing the permanent job, although things have gone awry since then. Last weekend’s tepid 1-1 draw at long relegated Huddersfield saw them miss out on the top four with a match to spare, meaning a galling season watching Champions League from afar lies ahead. United need to end the season with a bang at Old Trafford but Cardiff will be determined to end their Premier League stay by giving their former boss a bloody nose. It would be quite the way for Neil Warnock to sign off should he decide to leave this summer.

There will be a number of players saying farewell this weekend as they move on to pastures new. There is also a concern at St James’ Park that Sunday’s trip to relegated Fulham could be the end of much-loved Rafael Benitez’s time at the Newcastle helm. Yet to sign a contract extension with the Magpies, the 59-year-old was left in little doubt as to the affection in which he is held by supporters after last weekend’s clash with Liverpool. But Benitez has not hidden his frustration at the way the club has operated over the years under the ownership of Mike Ashley and it remains to be seen whether the right guarantees can be put in place.