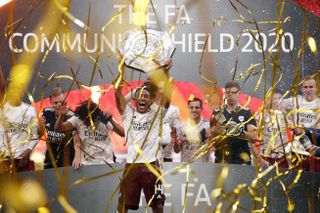 Arsenal captain Pierre-Emerick Aubameyang tucked away the winning penalty as the Gunners beat Liverpool in a Wembley shoot-out to lift the Community Shield on Saturday.

After his fine opener was cancelled out by Reds’ substitute Takumi Minamino, the curtain-raiser to the season ended 1-1 before Rhian Brewster missed the only penalty to see Aubameyang get his hands on more silverware.

Here, the PA news agency looks back on what we learned from the first game of a new season like no other.

The Art of the matter

When you face the challenge with belief and courage, anything is possible. COYG Proud of everyone! pic.twitter.com/QPOZCj18di— Mikel Arteta (@m8arteta) August 29, 2020

Arsenal head coach Mikel Arteta was appointed to his first managerial post in December, taking over a club on a dreadful run of form and seemingly spiralling further away from the success of the Arsene Wenger reign.

Couple to that a case of Covid-19, convincing his players to take pay cuts and several changes to the hierarchy above him and it is a minor miracle that Arteta is already enjoying success.

The 38-year-old has the players on board – that is clear, there is more running, more cohesion, more belief – and that has led to two trophies in one month as Arsenal added the Community Shield to their FA Cup final win over Chelsea on August 1.

Does Klopp need to shop?

It is highly unlikely that anything Liverpool boss Jurgen Klopp saw at Wembley on Saturday will suddenly force him to alter any plans he has for the forthcoming campaign.

The runaway Premier League champions were without a number of key men from last season, while their front three of Sadio Mane, Mohamed Salah and Roberto Firmino endured a rare collective off-day.

Liverpool have only signed Greece international full-back Kostas Tsimikas this summer but who would have expected a splurge of cash given their dominance last year?

The kids are alright for Arteta

With Aubameyang again among the goals and due to have his new contract announced by the club in the near future, it is understandable that he once again stole the headlines.

But Arteta, who has limited resources and would need to sell before buying anyone after the capture of Lille defender Gabriel Magalhaes is finally confirmed, has always had faith in the youngsters at his disposal.

Academy graduates Bukayo Saka and Ainsley Maitland-Niles were in fine form, the latter earning a late call-up to the senior England squad for the first time just hours after the game as rumours of interest from Wolves continue. Eddie Nketiah led the line and the likes of Joe Willock and Reiss Nelson also played their part for an Arsenal team which looks set to give them chances moving forward.

Minamino’s equaliser was his first goal in the red of Liverpool following his move from Red Bull Salzburg in January.

The 25-year-old Japan international was enjoying a fine goalscoring season in Austria before the switch but was limited to just five starts upon arrival at Anfield.

He will be hoping for the opportunity to make more of an impact in the coming season having shown his eye for goal at Wembley.

Having spent a decade out on loan or warming the Arsenal bench, Emiliano Martinez was finally given his chance to make an impression between the posts.

Bernd Leno’s knee injury at Brighton saw Martinez finish last season as Arteta’s first-choice and the Argentinian did not let him down as a string of superb performances saw him earn plenty of plaudits.

He cried with joy after the FA Cup final and – despite requiring a period of quarantine after returning from holiday and Leno now being fit and available – he kept the gloves for the Community Shield win, although there has been increasing speculation Arsenal may look to cash in during the current window.