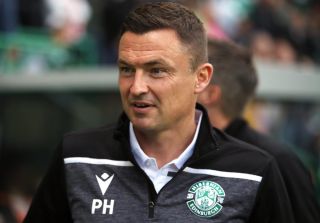 Hearts jumped above Hibernian and escaped the bottom of the Ladbrokes Premiership table with an Edinburgh derby triumph.

Celtic consolidated their lead at the top while Rangers kept on their tail.

Here the PA news agency looks at five things we learned from the weekend’s action.

Hearts can handle the heat

After protests outside Tynecastle the previous weekend and owner Ann Budge moving to give Craig Levein her public backing amid widespread calls for him to vacate his role, Hearts faced a high-stakes Edinburgh derby. The pressure intensified when Stevie Mallan gave Hibernian the lead with a wonder strike and Levein faced a huge final 20 minutes with his team still trailing. But Uche Ikpeazu knocked home an equaliser and 17-year-old full-back Aaron Hickey rose to the occasion with his first goal in first-team football to give Hearts a 2-1 win at Easter Road.

Hibernian face a test of mettle

With the pressure on Levein alleviated, it intensified on Hibs head coach Paul Heckingbottom after his side slipped to 11th with a record of one win from 11 league games. The Hearts manager recognised what his opposite number would be going through. “Listen, it’s a horrible business,” he said. “It’s difficult for all of us. You have got to handle the pressure that comes with the job. I’ve got empathy with every guy who has been brave enough to sit in this chair or chairs like it and take the heat.”

Neil Lennon is anyway, after receiving a yellow card for complaining about a penalty decision in Celtic’s 3-1 win over Kilmarnock. While not agreeing with being booked, he feels the system brings clarity. “It’s great,” he said. “It’s like a warning to calm down. It’s fine. I’ve no issue with that at all. I was a bit disappointed, but I’m not going to criticise the referee for that.”

Alfredo Morelos is calming down

After being sent off five times last season, the Rangers striker was warned he was seriously testing manager Steven Gerrard’s patience and doing his career some real harm. Gerrard praised the Colombian after he netted the opener in a 4-0 win at St Johnstone to take his tally for the season to 12 goals – and three yellow cards – in 15 matches. Gerrard said: “He’s in good place, he’s enjoying his football and he’s behaving himself. He was even shaking the referee by the hand on the way off so he’s definitely trying.”

One policeman behind the goal momentarily forgot what his role was as Ikpeazu netted from close range at Easter Road, and raised both arms before quickly regaining his composure. Whether he was a Jambo starting to celebrate or a Hibs supporter throwing his arms up in disgust, every football fan will empathise with his instinctive reaction. Hopefully his bosses do too.