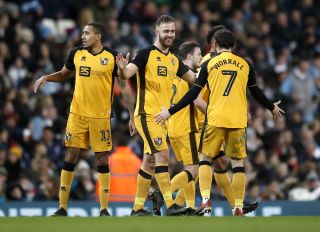 Port Vale striker Tom Pope caused a stir at Manchester City, Liverpool continued their dominance over Everton and a small piece of VAR history was made at Selhurst Park during a busy weekend of FA Cup action.

Here, the PA news agency picks out five major talking points from the 31 third-round ties played over the weekend.

Tom Pope’s boasts dominated Manchester City’s convincing 4-1 win over Port Vale. Veteran Vale striker Pope claimed in a mocking tweet last summer that he would score 40 a season if he played against City defender Jones Stones every week. He backed up his bold claim by levelling for the League Two club at the Etihad Stadium and jokingly bragged post-match that he would in fact be capable of “more like 50” goals. According to Pope, England international Stones was – perhaps unsurprisingly – unimpressed by the whole episode.

Not much magic about

The weekend came and went without a genuine third-round shock. League One strugglers Tranmere justifiably made headlines for battling back from three goals down to earn a 3-3 draw and replay against Premier League Watford, while third-tier Rochdale also deserve credit for snatching a 1-1 draw at home to Newcastle. Elsewhere, few eyebrows were raised as Championship clubs Sheffield Wednesday, Fulham and Derby enjoyed narrow victories over top-flight sides Brighton, Aston Villa and Crystal Palace respectively.

Premier League managers regularly talk of taking the competition seriously but the majority of this weekend’s team selections suggest priorities lay elsewhere. An average of 7.2 alterations were made by the 19 top-flight clubs in action on Saturday and Sunday. Sheffield United boss Chris Wilder changed his entire starting XI for the 2-1 win against non-league AFC Fylde, while Leicester and Southampton each opted for 10 changes. Everton (two), Tottenham and West Ham (both three) made the fewest changes.

Everton wasted a major opportunity to win at Merseyside rivals Liverpool for the first time since September 1999. Backed by almost 8,000 away fans and with fresh optimism following the recent arrival of manager Carlo Ancelotti, a strong Toffees line-up faced an inexperienced Reds team featuring a host of youth players. Despite the favourable circumstances, their Anfield misery continued courtesy of a stunning second-half strike from 18-year-old Curtis Jones. Everton have now lost on 13 of their last 23 trips across Stanley Park, drawing the other 10.

Change not VAR away?

Following repeated calls for referees to make use of pitchside monitors instead of relying solely on the judgement of the video assistant referee, Michael Oliver made history at Selhurst Park. A monitor was used for the first time in England when referee Oliver watched watched replays of an incident involving Crystal Palace captain Luka Milivojevic and Derby midfielder Tom Huddlestone. Oliver subsequently upgraded Milivojevic’s punishment from a booking to a red card, with his actions prompting optimism of a positive development in how VAR technology is implemented.