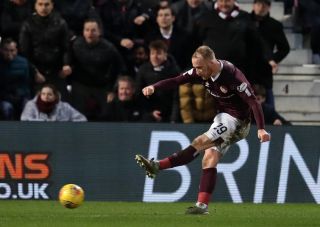 Steven Gerrard suffered disappointment in his 100th game in charge of Rangers as their 16-game Ladbrokes Premiership unbeaten run came to an end at Tynecastle.

Here, the PA news agency takes a look at five other things we learned from the weekend’s league action.

Steven Gerrard’s team saw the wheels come of their title hopes at Kilmarnock in their first game back from the winter break last season. This term they have slipped up again in their first game on the road following the shutdown after slumping 2-1 at Tynecastle. They have time to claw back their five point deficit – especially as they have a game in hand – but last year’s lesson shows they cannot afford any more mistakes. The basement Jambos, meanwhile, are now just a point away from the pack after seeing Daniel Stendel claim his first league win thanks to Liam Boyce’s debut winner and will now hope they have turned the corner after 10 Premiership games without a win.

It was all a bit of a struggle for Celtic against Ross County on Saturday as they went towards the hour mark leading only by a Callum McGregor goal. Edouard had started the game on the bench due to a toe injury but Lennon required the touch of class he provided. Two goals in three minutes – his header was his first touch and his strike was ruthless – had Hoops fans breathing easier. The 22-year-old French striker took his tally for the season to 20 in all competitions and he might just be the difference in the title race this season.

3. Tommy Wright talked too much at school

The St Johnstone boss admitted he “ruffled a few feathers” after admitting his frustration with the club’s lack of January signings during his pre-match press conference. There were no repercussions on the park as Saints beat Kilmarnock 2-1 and Wright did not labour his point after the game. “My frustration lies with the fact we could be more proactive rather than reactive,” he said. “But I have said enough. One of my school reports did say I talked too much.”

4. Kilmarnock are looking down the way

That is a natural consequence of losing seven league games on the trot. They remain seventh, ahead of St Johnstone on goal difference, but are now six points off the top six and only five above the bottom two. Manager Alex Dyer said: “We have to look down these days because we are closer to the bottom than the top six.”

5. Stephane Omeonga adds bite and energy to the Hibernian midfield

Hibs were missing three defenders against Motherwell but their fifth clean sheet of the Premiership campaign earned them a point. Omeonga walked a disciplinary tightrope on his first start since his loan return, after being booked and then felling Liam Donnelly, but he added a crucial layer of protection to the Hibs back four as Motherwell dominated possession but found it difficult to create many clear-cut chances.