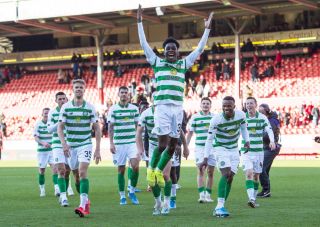 Celtic stayed top of the Ladbrokes Premiership with an impressive 4-0 victory over Aberdeen.

But Rangers remained right on their tails after they edged out Motherwell 2-1 at Ibrox.

Elsewhere, Kilmarnock moved up to third and both Hearts and Hibernian drew as the Edinburgh clubs’ struggles continued.

Celtic are over their blip

The champions saw the advantage of their Ibrox victory wiped out when they dropped five points in consecutive away games against Hibernian and Livingston. But they have bounced back in style over a memorable nine-day period. A 6-0 thrashing of Ross County was followed by an impressive Europa League win over Lazio and they were, in manager Neil Lennon’s words, “absolutely red hot” as they hit four first-half goals at Pittodrie.

Aberdeen are struggling to compete at the top

Manager Derek McInnes was already resigned to watching Rangers and Celtic fight it out for the title from afar but urged his team to land some blows on the Glasgow pair. However, he was “astonished” at some of his team’s defending and was shocked at a lack of determination and tackling as his side followed their recent 5-0 thrashing at Ibrox with another limp display.

The Ayrshire side moved up to third after a 1-0 win over St Mirren – their eighth clean sheet in 10 matches. They had three goalless draws earlier in that run but they have now won three matches on the trot. Gary Dicker joined the likes of Rory McKenzie, Chris Burke, Stephen O’Donnell and Dom Thomas in grabbing winners as Angelo Alessio’s side share the goals around.

A two-goal cushion is not enough for Hibernian

For the fifth time in six matches, Hibs failed to win after taking the lead. Even the most pessimistic fan at Easter Road would have thought they were on route to their first league win since the opening day when they went two up against Ross County inside 56 minutes. But Brian Graham’s 74th-minute strike sparked anxiety all round and Joe Chalmers hit a last-minute leveller. Paul Heckingbottom’s side have now lost 13 points from winning positions.

Filip Helander has come to the fore for Rangers

The Swede had an underwhelming start to life at Ibrox following his multi-million pound move from Bologna with an ankle injury not helping matters. He endured an uncomfortable night at Livingston last month but has kick-started his Gers career over the past week. The centre-back followed a commanding display in Porto by heading a late winner against Motherwell.