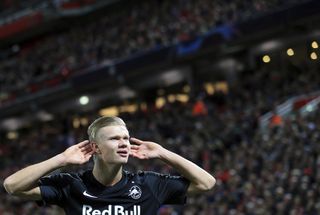 Haaland scored against Liverpool at Anfield on Wednesday night and here, the PA news agency takes a closer look at him.

Yes, Haaland’s dad is well known to English fans, with Alf-Inge Haaland a popular figure at Leeds and Manchester City. Haaland Sr arrived in England with Nottingham Forest in 1993 and made over 200 appearances in English football. He because a cult figure at Elland Road, but wider fans perhaps remember him best for his feud with Roy Keane.

And his son is a footballer too?

Erling Braut Haaland was born in Leeds on July 21, 2000. He started out with Bryne, then moved on to Molde, before a move to Salzburg followed intense speculation. Currently in his first full season with them, the 19-year-old has 18 goals to his name already this season.

What has he achieved so far?

In scoring a hat-trick against Genk last month, his fourth overall for the club, Haaland because the third-youngest player to score a Champions League treble. Raul and Wayne Rooney both achieved the feat when they were 18, for Real Madrid and Manchester United respectively.

Can he play for England?

Before anyone suggests it, no, Erling Haaland can’t play for England.— Andrew Haigh ⚡️ (@AndrewHaigh) September 17, 2019

Born in Leeds, a natural question to ask if if he is eligible for Gareth Southgate to select. The answer is no. Haaland was making international waves when he scored nine goals against Honduras for Norway’s Under-20 side at the summer World Cup and he has since gone on to be capped for the country for whom his dad made 34 appearances.

Will he stay with Salzburg?

Already Haaland is being linked with a move away, with Manchester City and Manchester United both mooted as possible destinations. The player himself said in a 2017 interview with Aftenposten that his dream was to “win the Premier League with Leeds” though the Championship side are unlikely yo be Haaland’s next stop.