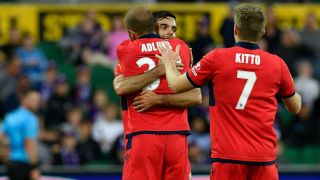 Adelaide United bounced back from their shock defeat to Brisbane Roar by winning 3-0 at Perth Glory, who slipped out of the top six.

Glory went into the match hoping to put their 6-0 battering at the hands of Sydney behind them, but Kenny Lowe's men were well beaten once again.

It took the visitors just 10 minutes to break the deadlock, as Daniel Adlung broke free and finished confidently, with Baba Diawara almost making it 2-0 shortly after.

United were made to wait for their second, but it did eventually arrive 19 minutes from time, as Nathan Konstandopoulos opened his A-League account with a curling finish, before Johan Absalonsen – who set up the second – capitalised on a goalkeeping error to round things off late on, moving the Reds up to third.

Western Sydney Wanderers replaced Glory in the top six by inflicting a 2-0 defeat on Roar, who suffered a third loss in four.

Roar started off the better side, but Wanderers were simply more effective in front of goal, with Oriol Riera tapping into an empty net just before the half-hour mark, before Mark Bridge secured a clinical triumph on the stroke of half-time at the end of a flowing move.

Clean sheet and three points away from home January 5, 2018