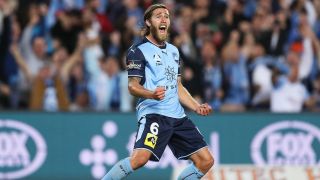 Sydney FC fought from 2-0 down to draw 2-2 with city rivals Western Sydney Wanderers in a thrilling A-League clash at Allianz Stadium on Saturday.

Oriol Riera's fine header, his seventh goal in six games for the club, gave the visitors the lead after just three minutes before Brendan Hamill ghosted in unmarked to nod home Alvaro Cejudo's free-kick after half an hour.

Sydney responded in the manner of true champions, though, with Bobo converting a penalty shortly before half-time and Joshua Brillante firing home the equaliser just after the hour mark.

The home side looked the more likely to bag a late winner, with Matt Simon heading inches wide in injury time, but they could not find the third goal that would have kept up their winning start to the campaign.

Melbourne City remain top of the table, two points above Sydney and four clear of the Wanderers, after they kept up their 100 per cent record with a 1-0 win over Wellington Phoenix.

The visitors were the better side for spells of the game at AAMI Park but Ross McCormack's fine free-kick in the 69th minute gave Melbourne their third win from three in the league.