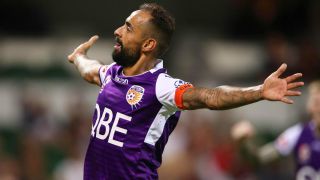 Perth Glory moved nine points clear at the top of the A-League table with their biggest-ever victory over Brisbane Roar at HBF Park.

Two goals from Andy Keogh helped them to a 4-0 win on Saturday, which moves them further clear of second-place Melbourne Victory, who drew with Wellington Phoenix on Friday.

Jason Davidson opened the scoring after 19 minutes before Keogh expertly headed in Scott Neville's cross to make it two 35 minutes in.

In first-half injury time, Keogh netted his second with a simple tap-in after a fine run from Diego Castro inside the box.

Castro made the points safe with a deflected strike nine minutes after the restart, having started the move with a fine backheel before racing to meet Davidson's pass.

Glory have now equalled their previous record of 14 wins in a single A-League season, set back in 2014-15.

In the day's earlier game, Western Sydney Wanderers made it back-to-back wins for the first time since last February with a 3-1 defeat of Adelaide United.

Oriol Riera glanced in the opening goal at Coopers Stadium and, when Craig Goodwin's penalty was saved by Vedran Janjetovic, it began to look a tall order for the home side to recover.

Ryan Kitto did level 44 minutes in but, just as they looked to be taking control of the game, Adelaide went behind after Roly Bonevacia's shot deflected past Paul Izzo.

A stylish lob from Abraham Majok sealed the win, which moves Wanderers onto 16 points.