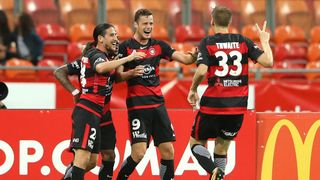 Western Sydney Wanderers made a winning start to the A-League season thanks to a debut goal from Oriol Riera against Perth Glory.

The 31-year-old former Deportivo La Coruna striker, who has netted four times already in the FFA Cup, opened the scoring at Spotless Stadium to give the home side all three points.

Wanderers exploded into life at the end of a quiet first half with two goals in three minutes, Riera slotting home from Alvaro Cejudo's pass before Jumpei Kusukami converted Brendan Hamill's cross at the end of a rapid counter-attack.

The hosts were forced to hang on for the victory in the end, with Hamill deflecting Andy Keogh's header into his own net to make for a nervy final few minutes, but they deserved to claim all three points as Glory endured another disappointing trip to New South Wales.

In the earlier match, Wellington Phoenix played out a 1-1 draw with Adelaide United at Westpac Stadium.