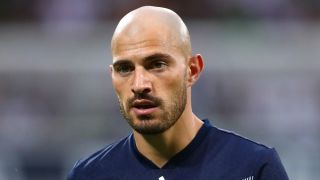 Australia's Asian Cup absentee James Troisi offered a timely reminder of his quality with a stunning strike to give Melbourne Victory a 2-1 win over Newcastle Jets.

Troisi scored decisively in the 2015 Asian Cup final and claimed national boss Graham Arnold's selection for the continental showpiece was "not picked on performance or merit" after he missed out on a place in the Socceroos' 23-man squad for their title defence in the United Arab Emirates.

It means the attacking midfielder remains on duty for Victory, who took an early second-half lead at AAMI Park on Saturday when Terry Antonis converted Kenny Athiu's lay-off from Troisi's incisive pass.

Newcastle substitute Kaine Sheppard smuggled home from close range in the 78th minute but the hosts claimed the points when Troisi smashed a vicious winner into the roof of the net from the left-hand side of the penalty area.

TROISIIIIII! What a goal to win it for Victory!

Victory are three points shy of A-League leaders Perth Glory and four better off than Wellington Phoenix in fifth, with Roy Krishna inspiring a remarkable comeback against Central Coast Mariners.

Now winless after 12 games this term, the Mariners appeared on course to break their duck after Matt Simon's penalty and Andrew Hoole's goal made it 2-0 midway through the first half.

But the game turned early just after half-time when Kye Rowles was sent off for a foul on Krishna in the penalty area, the Fiji international converting from 12 yards to half the deficit.

Krishna won and converted another penalty before the hour and his driving run led to David Williams netting decisively in the 65th minute.

The result means the Mariners are five points adrift at the bottom after two draws and 10 defeats.