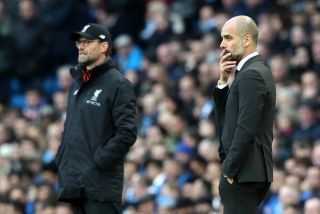 Manchester City returned to the top of the Premier League table after recording a 2-0 victory over neighbours Manchester United at Old Trafford on Wednesday night.

The win saw Pep Guardiola’s side move one point clear of Liverpool with three games remaining in the fight for the title.

Here, Press Association Sport looks at the run-in for both teams.

Jurgen Klopp’s men could hardly have a more favourable game than the visit of the already-relegated Terriers, who have collected just six points on the road all season, on Friday night. The perfect opportunity to put the pressure on City.

The spotlight turns to City on Sunday as they make the short trip to Turf Moor to face a Burnley side safe from the drop. Guardiola’s men have already met the Clarets twice this season and thumped them 5-0 on both occasions.

Liverpool go in to bat first again on the Saturday with a trip to Tyneside, where former Reds manager Rafael Benitez is in the opposition dug-out. Klopp’s men will be wary of a Newcastle side who have won six of their eight home league games since the turn of the year.

Rodgers’ revenge? Leicester boss Brendan Rodgers was pipped to the title by City when he was in charge of Liverpool in 2014. He probably still wakes in the middle of the night thinking about Steven Gerrard’s slip against Chelsea. Could he do his old side the biggest of favours on Monday night?

The Blues are beaten this evening.#WOLCHEpic.twitter.com/NhQaqba1TI— Chelsea FC (@ChelseaFC) December 5, 2018

Possibly Liverpool’s most dangerous fixture, especially if the title is on the line. Wolves could be in the race to secure seventh spot and potential Europa League qualification and have so far this season taken points off every other top six team, except for one – Liverpool.

Could the title be won on the south coast? Brighton have barely laid a glove on City in two meetings this season, but only narrowly lost the FA Cup semi-final 1-0 earlier this month. The Seagulls should be safe from relegation by then but if they are not, things could get interesting.