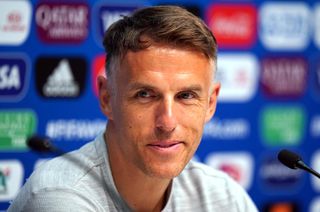 The Women’s World Cup quarter-finals get under way on Thursday when England face Norway in Le Havre.

Here, Press Association Sport takes a look at the teams who have made it through to the last eight.

Phil Neville’s Lionesses followed up a 100 per cent record in Group D by beating Cameroon 3-0 in an ill-tempered last-16 clash. They head into Thursday’s contest with Ellen White very much in form, the forward having
netted her fourth goal of the tournament in the Cameroon match.

The 1995 champions won twice and competed well in a 2-1 loss to France en route to finishing second in their group, before seeing off Australia via a penalty shoot-out. They are on their best run since 2007 despite
the absence of Ballon d’Or winner Ada Hegerberg, who decided in 2017 to step away from the team, unhappy with the way women’s football was being run in the country.

The hosts take on the United States in a blockbuster showdown in Paris having opened their campaign by thrashing South Korea 4-0, then had a series of tight victories. Corinne Diacre’s team defeated Brazil 2-1 in the last 16 thanks to Amandine Henry’s finish in extra time.

The defending champions, top of the world rankings, registered the biggest win in Women’s World Cup finals history when they thrashed Thailand 13-0 in their opener, with Alex Morgan netting five times – she still leads the tournament’s scoring chart with that tally. The US scored 18 goals in total and conceded none across their three Group F victories before looking less comfortable as they beat Spain 2-1 thanks to two Megan Rapinoe penalties.

At 15, Italy are the lowest-ranked side left in the competition. Their first Women’s World Cup finals campaign since 1999 has seen them top Group C on goal difference after beating Australia 2-1 and Jamaica 5-0, then losing 1-0 to Brazil, and sealed a place in the last eight with a 2-0 victory against China. They face Holland in Valenciennes.

The reigning European champions took maximum points in a group featuring Canada, Cameroon and New Zealand before a contentious late penalty gave them a 2-1 win against Japan in the last 16. Lieke Martens scored her second goal of the game after it was judged that Saki Kumagai was guilty of handball.

The two-time winners head into the last eight having yet to concede after four games. They won each of their Group B games, then saw off Nigeria 3-0 to progress to the quarter-finals. Star midfielder Dzsenifer Marozsan, who broke a toe in the opener against China, was on the bench for the Nigeria game. Martina Voss-Tecklenburg’s team take on Sweden in Rennes.

Sweden claimed second place in Group F, in which they beat Chile and Thailand before losing to the US. They then got past Canada 1-0 in the last 16, with Stina Blackstenius scoring the goal and team-mate Hedvig Lindahl saving a subsequent Janine Beckie penalty.