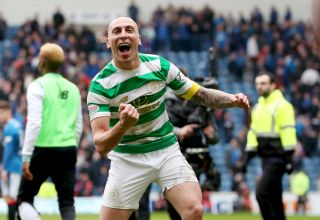 Celtic skipper Scott Brown fears a player could be assaulted on the pitch as crowd problems in Scottish football this season continue.

In Friday night’s 1-1 draw between Rangers and Hibernian at Easter Road Gers captain James Tavernier found himself face to face with a fan who had jumped out of the home support before being led away. Police later confirmed a 21-year-old man had been arrested.

The incident came six days after a glass bottle was thrown from the same section of the stadium as Celtic’s Scott Sinclair prepared to take a corner in a William Hill Scottish Cup game and on top of a series of missile-throwing incidents this season.

Hibs chief executive Leeann Dempster admitted no action had been ruled out after being asked whether her club could close the section of the stadium and PFA Scotland has demanded a fresh approach to tackling trouble in grounds.

In May 2017, in a game against Rangers at Ibrox, a fan tried to confront Brown and, speaking after Celtic’s goalless draw against Aberdeen at Parkhead, the Hoops midfielder said: “You just don’t realise it is happening when someone runs up to you.

“Lucky enough they don’t have something to hit you with because that is going to be the next thing – someone is going to run on the park and hit someone with something.

Asked about the potential damage to the reputation of the Scottish game, Brown replied: “Especially when someone is getting a bottle of Buckfast thrown at them.

“It is up to individuals and it is hard to stop individuals – they are either too drunk or not drunk enough.”