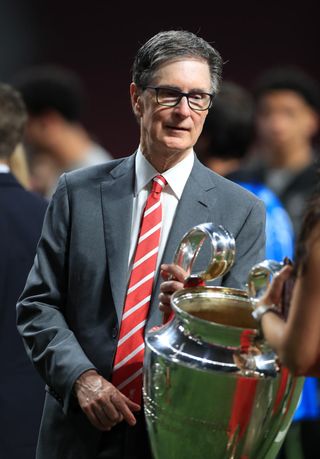 It is nine years since Fenway Sports Group – then New England Sports Ventures – completed their purchase of Liverpool.

The PA news agency takes a closer look at their reign.

NESV, fronted by principal owner John W Henry, complete the £300million purchase of Liverpool, avoiding the threat of administration due to a £237m debt owed to Royal Bank of Scotland. They inherit a club 18th in the Premier League after their worst start to a season since Liverpool returned to the top flight in 1962.

Damien Comolli appointed director of football strategy as the new owners try to bring in a European model for the club.

Roy Hodgson sacked with the club 12th in the table, just four points above the bottom three, having won only seven of 20 Premier League matches. Former player and manager Kenny Dalglish returns for a second spell in charge on a temporary basis.

Liverpool win their first trophy under the new owners, beating Cardiff on penalties in the League Cup final.

Comolli sacked for failures in the transfer market.

Dalglish sacked after failing to secure a Champions League place, despite winning the League Cup and reaching the FA Cup final.

Liverpool announce plans to remain at Anfield and redevelop the ground, abandoning plans for a new stadium in Stanley Park.

Henry writes his now-famous Tweet in response to Arsenal making an offer of £40,000,001 for Luis Suarez, in the mistaken belief they had triggered a release clause.

Liverpool finish second in the Premier League, missing out on a first league title for 24 years by two points to Manchester City.

Liverpool sell Suarez to Barcelona for a club-record £75m.

A £115m-million redevelopment of the Main Stand is announced.

Rodgers sacked with the club 10th in the Premier League.

FSG apologise to fans, who staged a walk-out in a home game against Sunderland, and abandon plans for significant ticket price rises.

New Main Stand is officially opened with a home match against Leicester.

Liverpool break their transfer record with the £75m signing of Virgil Van Dijk, making the Holland captain the world’s most expensive defender.

Liverpool produce one of the greatest comebacks in their history with a remarkable 4-0 second-leg victory over Barcelona to reach a second successive Champions League final.

After a thrilling title race Liverpool finished second with a record 97 points, finishing a point behind Manchester City.