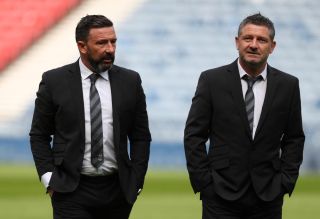 The pair have been issued with misconduct charges and hearings have been pencilled in for May 3.

McInnes was sent to the stand during his team’s William Hill Scottish Cup semi-final defeat on Sunday after reacting to sectarian abuse from Celtic fans with a gesture.

Docherty had earlier been dismissed following comments made to referee Craig Thomson during the interval.

Both will be free to sit in the dugout in Saturday’s crucial Ladbrokes Premiership clash at Rugby Park as Aberdeen look to get back above Kilmarnock into third place.

Defender Andrew Considine said on the club’s official website: “It’s huge, it’s something you look forward to going into the summer break knowing that you’re playing in Europe.

“We’ve been lucky enough over the last few seasons that we’ve been involved and had some fantastic ties against some incredible teams.

“It’s something you want to be a part of and it sets you up nicely for the upcoming season.

“We want to be involved in European football and that starts on Saturday and hopefully taking care of business against Kilmarnock.

“Kilmarnock have been outstanding this year. It’s a game that a lot of people will look at and say the pressure is on us, but that’s fine, we’ve dealt with that over the years.

“Even at the end of last season, nobody would’ve dreamed of us beating Celtic but we went and did it.

“It’s games like that that the boys thrive on so here’s hoping we get the result needed on Saturday.”