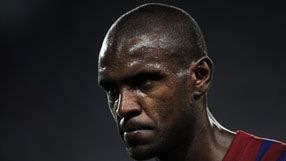 "Given the particular nature of this recovery process, Abidal will have to undergo regular hospital check-ups," a medical note said on their official website.

The France international, 32, underwent a lengthy operation on April 10 with an organ donated by his cousin Gerard.

He had previously had surgery to remove a tumour from his liver in March last year and returned two months later to lift the Champions League trophy at Wembley.

Barcelona have one more game left this season, the King's Cup final against Athletic Bilbao at Madrid's Calderon on Friday.

It will be coach Pep Guardiola's last official game at the helm before he steps aside for his assistant Tito Vilanova to take charge for next season.