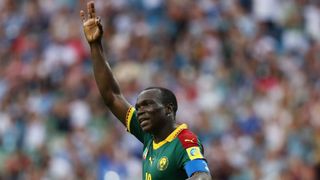 Vincent Aboubakar has committed himself to Porto by signing a new four-year contract that includes a €50million buy-out clause.

Cameroon international Aboubakar was linked with a permanent switch to Besiktas, where he spent the 2016-17 season on loan and won the Super Lig title, and Newcastle United in the off-season.

However, the 25-year-old striker has put an end to any further speculation by renewing his deal with Porto until 2021.

In addition, Porto announced they had secured a further 60 per cent of Aboubakar's economic rights from Lorient for €7.2m.

He has started the season in strong form, scoring eight goals in nine appearances in all club competitions this term.

Porto sit two points clear of Sporting CP at the top of the Primeira Liga and return to action with a Taca de Portugal clash against Lusitano de Evora on Friday.